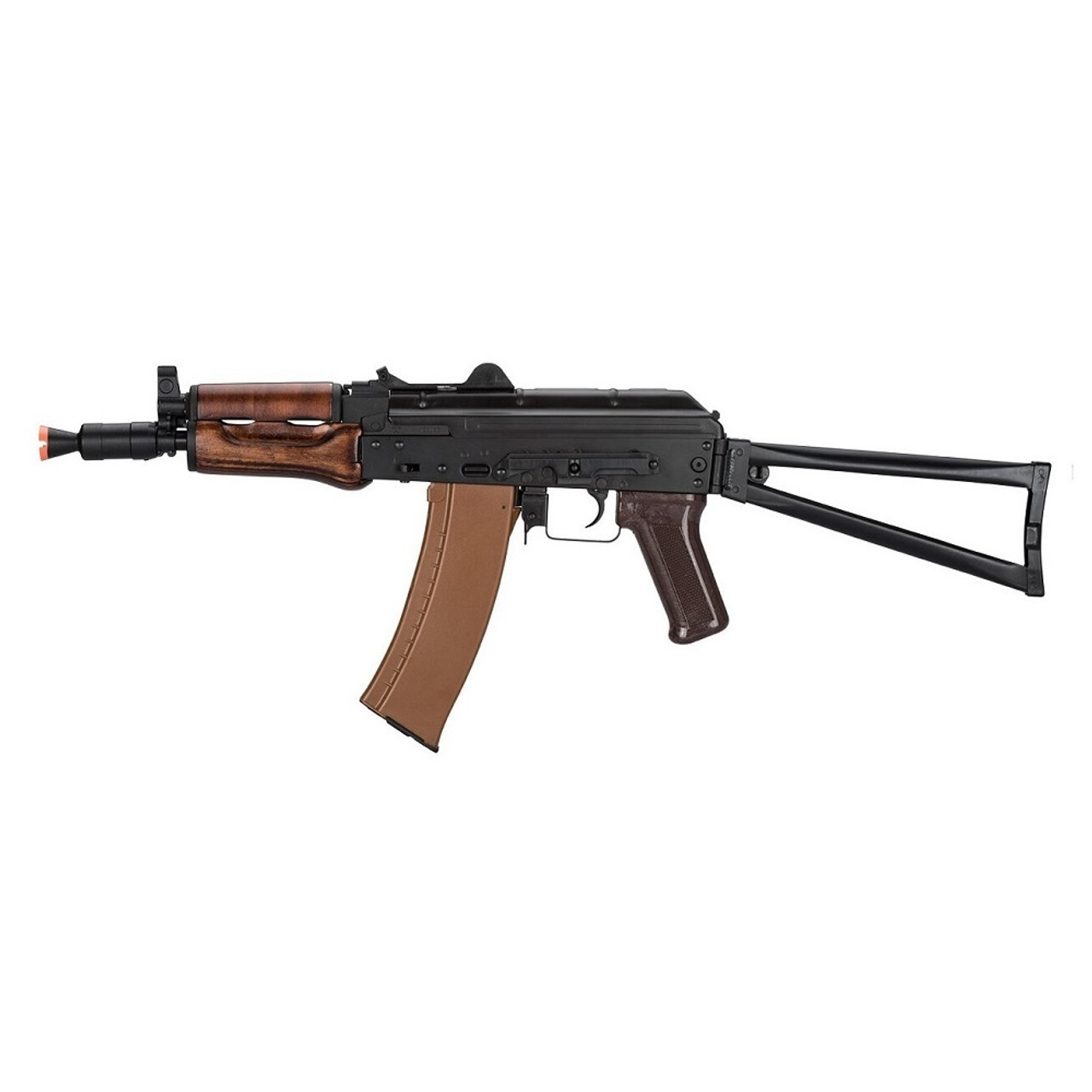 Just like the real AK, the airsoft counterpart is a popular rifle and can come from many different manufacturers, each with their own features and nuances. The rifles that we carry come from ASG, Echo1, G&G, and occasionally some other brands like LCT, CYMA and Tokyo Marui. ASG produces some great quality starter AKs under the Arsenal series. You can have it the classic way or the modern tactical style. We only sell high quality realistic airsoft BB guns that can be modified. But remember, these are not toy guns.

Echo1 produces both sportline and proline level guns and their Red Star series are probably some of the best AKs made that don't cost too much. Their metal guns in particular feel great and the wood models will have real wood for the furniture. These guns shoot at the highest limit so these are perfect outdoor guns.

Something that people love about airsoft AK rifles is that there magazines can typically carry more than other airsoft guns.  As an example the standard AK style high capacity magazines holds 600 rounds of BBs!  This is a huge advantage over other guns that may only hold 200 - 300 rounds in their magazines.  Something to note is that you will need to invest into larger magazine pouches than an M4 uses.

To get more information or learn about specific details of a ak47 airsoft model please contact us.

How Are They Powered?

Generally speaking most AK-47's are powered by electric and are considered AEG's. There are some Gas models but we typically do not carry those.

About the AK rifle

The AK is a 7.62x39mm assault rifle of Soviet origin developed by Mikhail Kalashnikov. AK stands for Avtomat Kalashnikova (Kalashnikov's Automatic Rifle). Kalashnikov began development in 1945 in post World War II Soviet Russia where the lessons learned from that conflict instilled a strong desire within him to see his countrymen armed with better weapons. He had served in the war and was wounded, and spent time recovering in a hospital where he listened to the musings of other soldiers who were grumbling about the weapons they had and what they were up against. He like many other Russians observed that the Germans had superior weaponry in the form of the StG44, which many consider to be the grandfather of all assault rifles. It was after this that Kalashnikov began designing weapons. At the time, the Soviets pushed to develop and adopt a new intermediate caliber rifle round which gave us the 7.62x39mm round when they saw the effectiveness and flexibility the StG44 had.

The assault rifle concept was new at the time when many were still fielding large caliber rifles in bolt action configuration. The Americans were fielding Garands which were using similar caliber rounds but was semi-automatic. Post WWII, the Soviets started to use the SKS rifle which was a semi-auto clip fed rifle using their newly developed round. Kalashnikov took note of the Garand and StG44 for all the elements that made them good and began coming up with an intermediate rifle caliber gun that was select fire, effectively making it a machine gun designed for the individual soldier.

Formally adopted in 1949 by the Soviet military, this simple but effective rifle saw huge success and became one of the most prominent and most iconic weapons in the world. The original models were AK-47s but many of the rifles you will see today are based on the later improved versions dubbed the AKM which was introduced in 1959. This gun has been produced by many countries both legally and illegally and can be put together with simplistic tools when compared to how modern rifles are built. This is one of the most prolific and influential firearms in the world.

A: This all depends on personal preference.  Generally people who like the AKs enjoy a more classic look to their airsoft rifles and enjoy having wood furniture on them.  There are also many modern versions of AKs that have many similar rail features that you find on modern M4s.

Q: Can I mount a flashlight to an AK 47 airsoftt?

A: This depends on the specific model.  Some feature rail systems, and some do not.  If you have questions on a specific product make sure to contact us and we'll be happy to help!

A: There are many, but brands like daisy, cybergun, crosman, and KWA have yet to make one.

Q: Can I put paintball BB's in my airsoft ak47?

A: No. We do not recommend this because if they break the mess in a gearbox will be a disaster. We recommend 6mm plastic BB's.