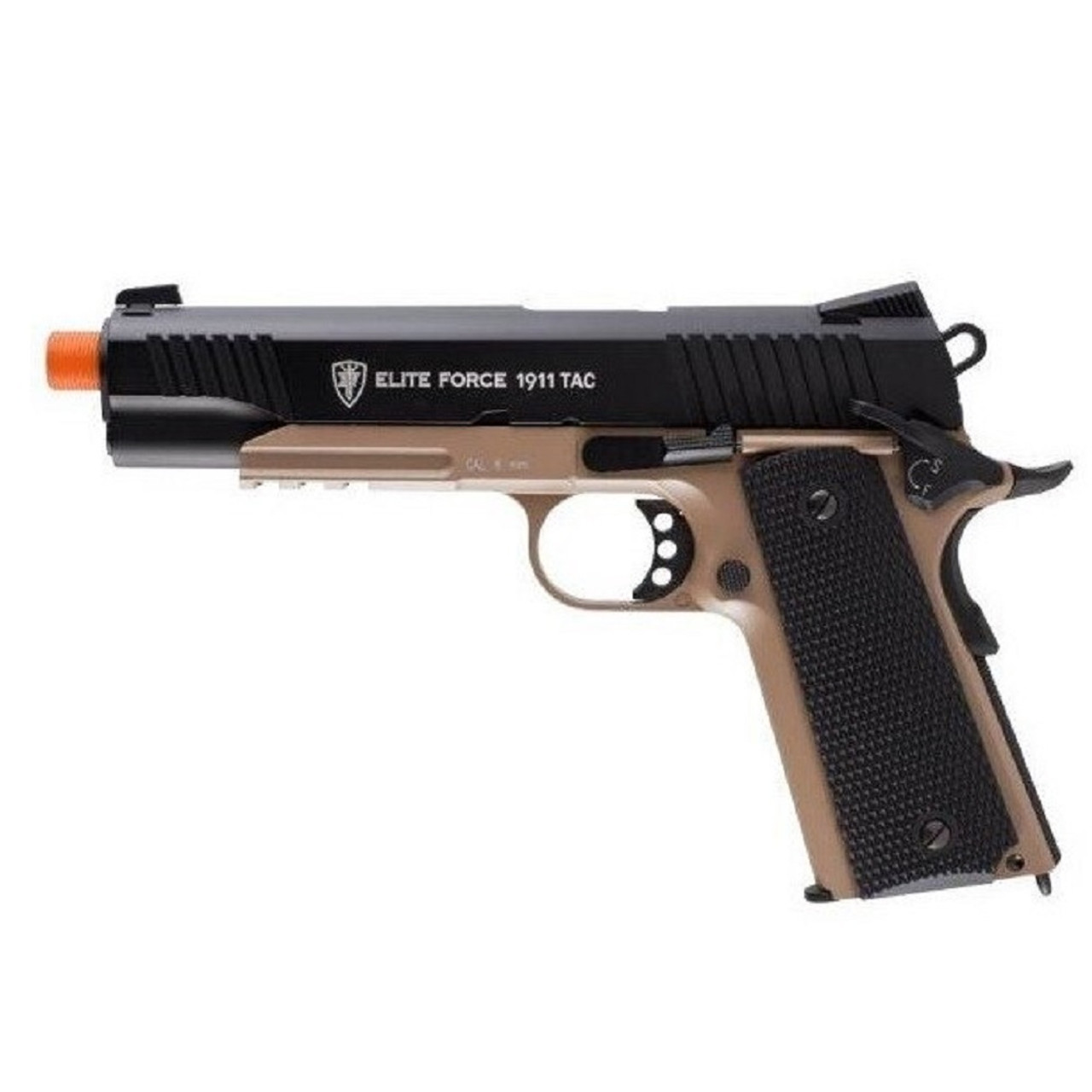 Check out our selection of green gas, spring, and c02 powered Airsoft 1911's. Find great deals on airsoft pistols at Fox Airsoft.  Learn More About the 1911 Airsoft Pistols we sell here. Have questions? Use the chat or email us.

Originally entering service in 1911 (hence the name), the real firearm version of this pistol has seen widespread use in numerous conflicts. It was the standard issued pistol for American armed forces up until the '80's when it was replaced by the M9 Beretta 9mm pistol. Due to its popularity, it never got fully phased out and sees limited use in some special units. An airsoft 1911 is the airsoft version of this real firearm that is molded to look and feel like the real thing.

For the most part, the 1911 has remained functionally unchanged since its initial release.  A great pistol that replicates the original style is the Elite Force 1911 A1.  Most modern changes to the design are minor at best and were typically for better ergonomics, sighting, or enhancing reliability. What makes the 1911 so popular? The 1911 has many things going for it. It has always been a durable and reliable pistol, and easy to shoot. The 1911 is very controllable pistol in a potent caliber, the hard hitting .45acp round. The 1911 is known to be a comfortable pistol to handle due to its slim frame. In modern terms we call the magazine single stack due to its rounds being stacked in a single column in the magazine, thus single stack, which lends itself to an overall slimmer pistol. This is however one handicap  of the 1911 compared to today's other firearms which hold much more ammunition.

In airsoft form and in our experience, the 1911 is just as popular compared to its real counterpart. The most prominent makers would be Elite Force and Cybergun, but there are other brands too. You can't really go wrong with the 1911's out there so when it comes to choosing your 1911, it boils down to the color/finish you want and some small key features. The Elite Force and Cybergun models share interchangeable parts so magazines and replacement parts are cross compatible and makes these a good long term choice for pistols.

What makes the modern 1911 different from the original? The originals, often call the GI style will have a spur hammer and a different shaped grip safety than the modern guns. The back portion of the grip often referred to as the backstrap will be a little more pronounced due to the . The safety will be on the left side only and the sights will be very small. Other than that, the modern pieces feature a different hammer and a beavertail grip safety which allows you to have a higher grip on the gun. The backstrap portion will be flatter which some find to be more comfortable. The sights are often better on the newer 1911s and they may come equipped with an ambidextrous safety lever. A huge difference will be the addition of a picatinny on the bottom front of the pistol frame. This section is called the dust cover. This allows you to add accessories like lights and lasers. Be aware though the 1911 is a style of pistol made by many makers and it can be tricky to find the correct holster.

A: Because it's awesome!  The size, weight, and fit in most people's hands makes this a very solid pistol.  The variants we sell also shoot excellent and they are very reliable

A: True suppressors are not allowed per the ATF.  There are options to install barrel extensions, or mock suppressors that give the same look as a suppressor.

Q: What is the Muzzle Velocity of an airsoft 1911?

A: This depends on the specific brand and product line you purchase, but typically we see them shoot around 300 FPS.

1. The 1911 is a single-action, semi-automatic, magazine-fed, recoil-operated pistol chambered for the .45 ACP cartridge.
2. It was designed by John Browning and first produced by Colt Manufacturing Company.
3. The 1911 pistol is considered one of the most influential and widely used handguns of the 20th century.
4. The 1911 is still in production today and is used by military, law enforcement and civilians around the world.
5. The original Colt 1911 was a .45 ACP with a 7-round capacity.
6. The 1911 was the standard-issue sidearm for the United States armed forces from 1911 to 1985.
7. In 1911, the U.S. military adopted the Colt 1911 as their standard-issue sidearm.
8. The Colt 1911 was used by the U.S. military in both World War I and World War II.