Today we’re doing an overview on the Umarex Deluxe edition Glock 34 gas blowback pistol. This is CO2 powered. On the outside, it’s metal where it’s metal on the real Glock, and polymer where it’s supposed to be polymer. For those of you wondering, it is produced by VFC and based on their existing system of CO2 and green gas pistols. 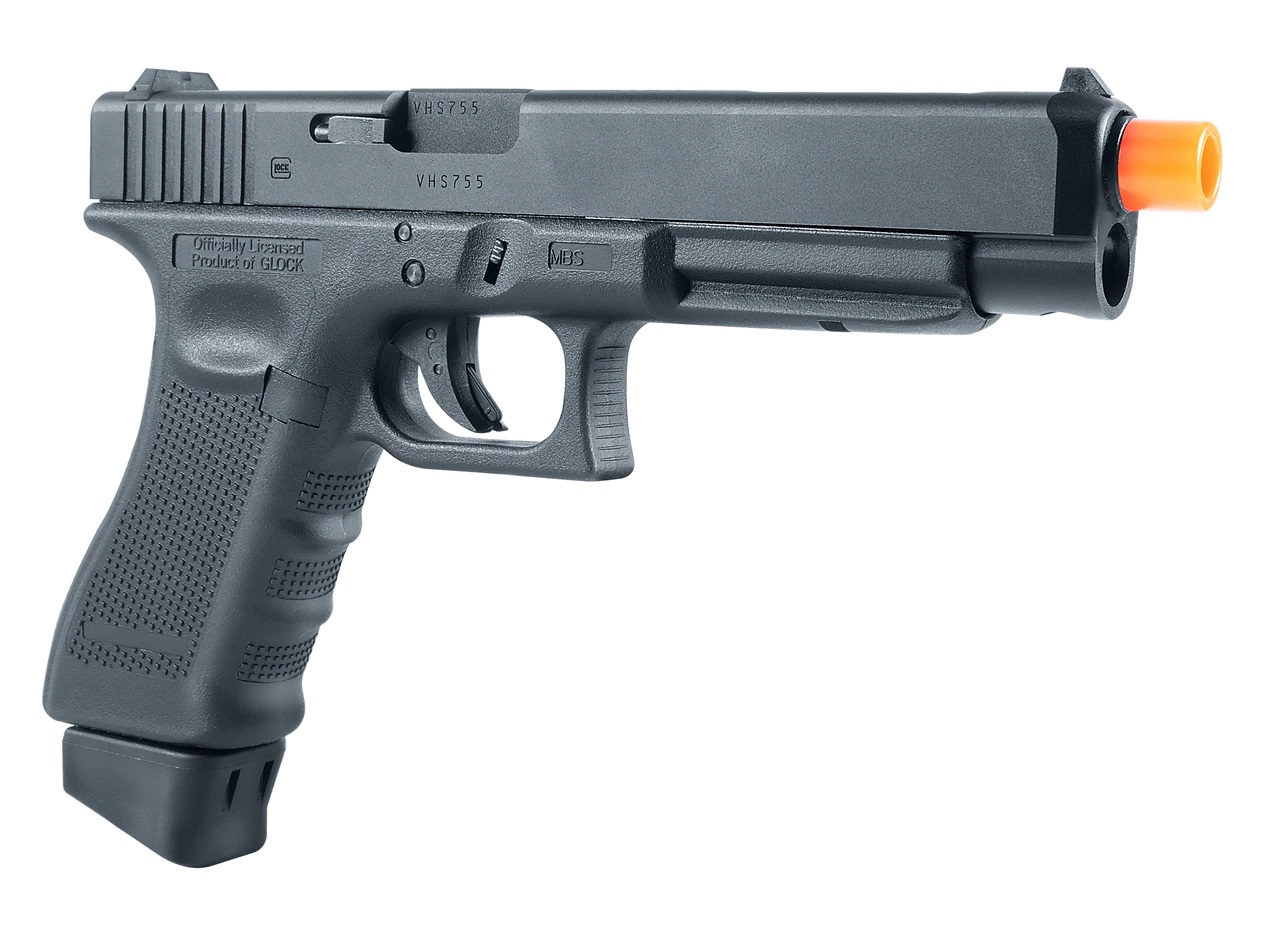 What makes this model the deluxe edition is the beefed up internals inside the gun. Typically a gas gun works pretty well out of the box, however once the internal metal components start to wear from high usage, it is time to rebuild the gun. Typically for the price you pay for most airsoft pistols, these won’t last forever nor should you expect it to. At the same time, it’s never been done before where you have a pistol that is reinforced this much out of the box. Talking with Elite Force in the past with my input, they said it would drive the price up on a lot of your favorite pistol. This is going to be a test to see if this is something people will want. They did end up listening to customer demands and have now released an upgraded steel hammer assembly which will drop into the Glock 17 models if you are handy and want to upgrade your existing Elite Force Glock 17 (VFC version) to be similar to this Glock 34.

If your pistol were to go down from old age, repairs can be a costly endeavor in terms of parts and labor so it’s usually cost prohibitive unless you work on your own pistol. In reality, that’s not a great option but if you are capable, some brands make rebuild kits to keep your pistol working for a long time to come. With the upgrade to steel for all the critical components, this addresses that issue and gives you a pistol that can stand up to rigorous use. This is similar in concept to the training Glocks we’ve seen in the past which are beefed up and would outlast your typical airsoft pistols.

Gas guns of any sort, even this one, have to be lubricated and have its seals maintained regularly. Though the internal hammer parts are all steel, the seals inside the gun are still something you will have to think about from time to time.

Let’s talk about what’s outside:

The pistol is based cosmetically on a 4th generation Glock 34 which has a 5” length barrel and a longer slide. The glock 34 is popular among glocks for competition use due to the longer sight radius and Glocks in generally are known to be reliable. The generation nomenclature has nothing to do with the generation of product this airsoft gun is so much as it is based on the cosmetic variations on the real Glocks. Fourth generation glocks are known for the improved grip texture and interchangeable backstraps.

The deluxe edition Glock comes packaged in a real Glock case and has extra backstraps to fit various size hands.

The magazine has an extended base to clear the CO2 capsule. To load the CO2 you slide the base plate back and access the big screw at the bottom. The magazine holds 23 rounds and this pistol is tuned strictly for CO2.

This pistol functions as the real Glock would. The recoil is pretty up there among other airsofters, I would rank it near the top. There is no active safety lever to flip on or off. Your safety is going to be passive, based on the patented Glock Safe Action. Unless you engage the trigger directly in the center, the trigger will not move. The slide has a large port at the top to reduce the moving slide mass. The sights are plastic style like you find on regular glocks. The rear sight is integral to holding the internal parts inside the slide so for anyone wondering, sights cannot be changed. Underneath the dust cover on the frame is a light rail that can take most aftermarket lights or lasers.

We have had a number of customers expressing interest in a realistic airsoft pistol to train with while ammo prices and scarcity are all over the place with world events being what they are. This is probably one I would recommend even to the non airsofter due to the durability.

I would say for the training enthusiasts, this is a better option than the standard Glock models. Though those are solid in their own right for your average airsofter, I feel better offering these beefed up versions to airsofters and non-airsofters alike because I believe they will be less trouble for you down the road with it being more durable.

Other Airsoft Pistols for Sale

Airsoft guns and real guns rarely feel so close that you can’t tell the difference when it comes to pistols, and I still have to say this does not. As far as weight goes, a the airsoft Glock with magazine weighs in at 1 pound 8 ounces. You can do some great dry fire, force on force, and some other types of drills. As a lot of people in the real firearms community are starting to notice, it’s actually a great tool if you use it in the correct context and understand its limitations and benefits. 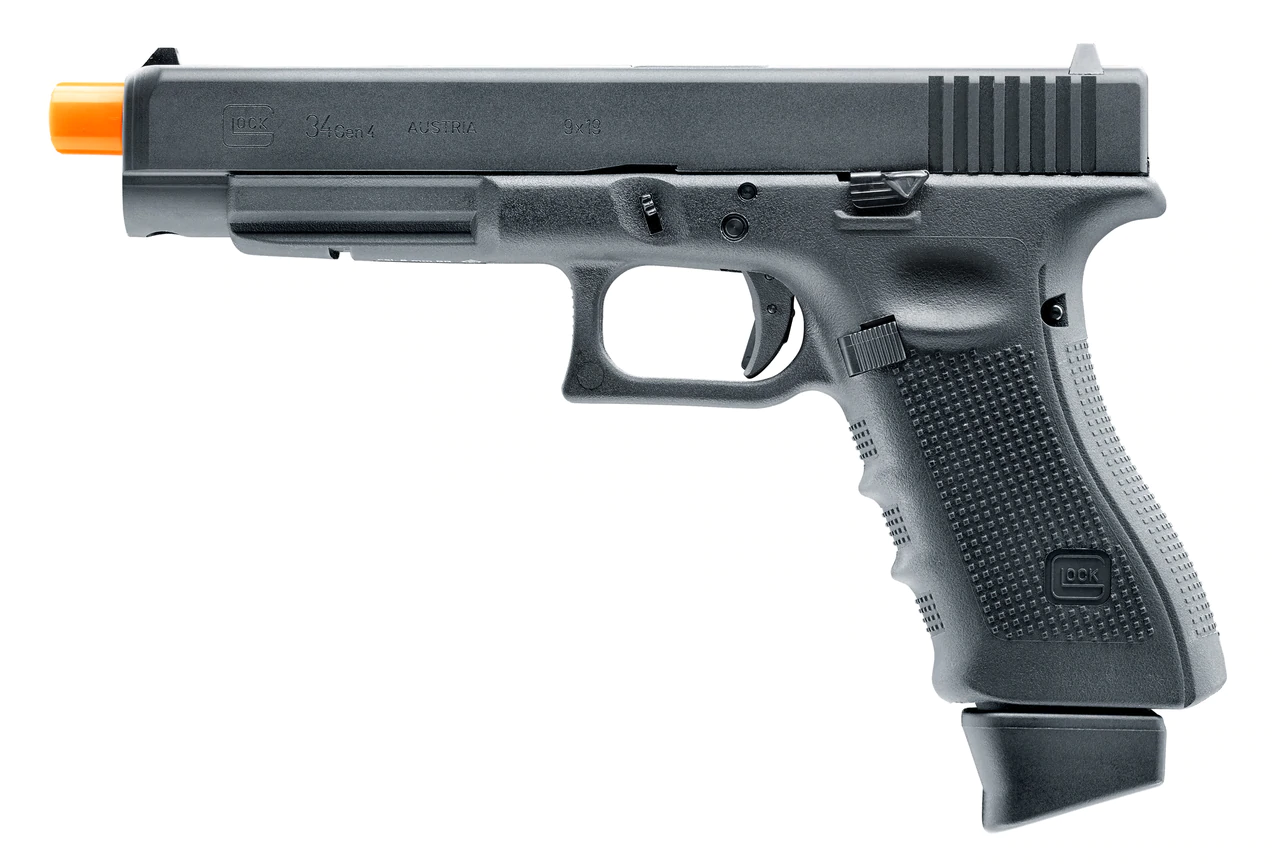 So in conclusion, if you want something that is a Glock and will be very solid down the line, there exists a product out of the box that you do not have to sit there and upgrade. It’s all here in this Glock 34 and I think it will deliver the durability in the key parts where most airsoft guns will fall short.