Alright guys, this is Tang again and I know a lot of people have been asking for an in-depth review of the new Elite Force MP7 AEG. I previously gave my first impressions on it which still hold very much true. Now that I've had a little more trigger time behind it I can help you decide if this gun is right for you.

First, let's get into the history of the gun. You've seen it everywhere in the media such as movies, games, and the news. The MP7 was released in the early 2000's by H&K to meet NATO's requirement for a personal defense weapon (PDW) that fired a cartridge that could be easy to control like a pistol round but give some improved performance and range without being a full rifle round. What you have is an intermediate cartridge that could be fired in a weapon that could defeat body armor but was easy to use in a PDW capacity which is where a pistol would fall short. Usually this role is taken by pistols or pistol caliber submachineguns and the MP7 would be a much easier to use and effective option. This gun can be seen in the hands of police forces, counter-terrorist units, and military units worldwide. 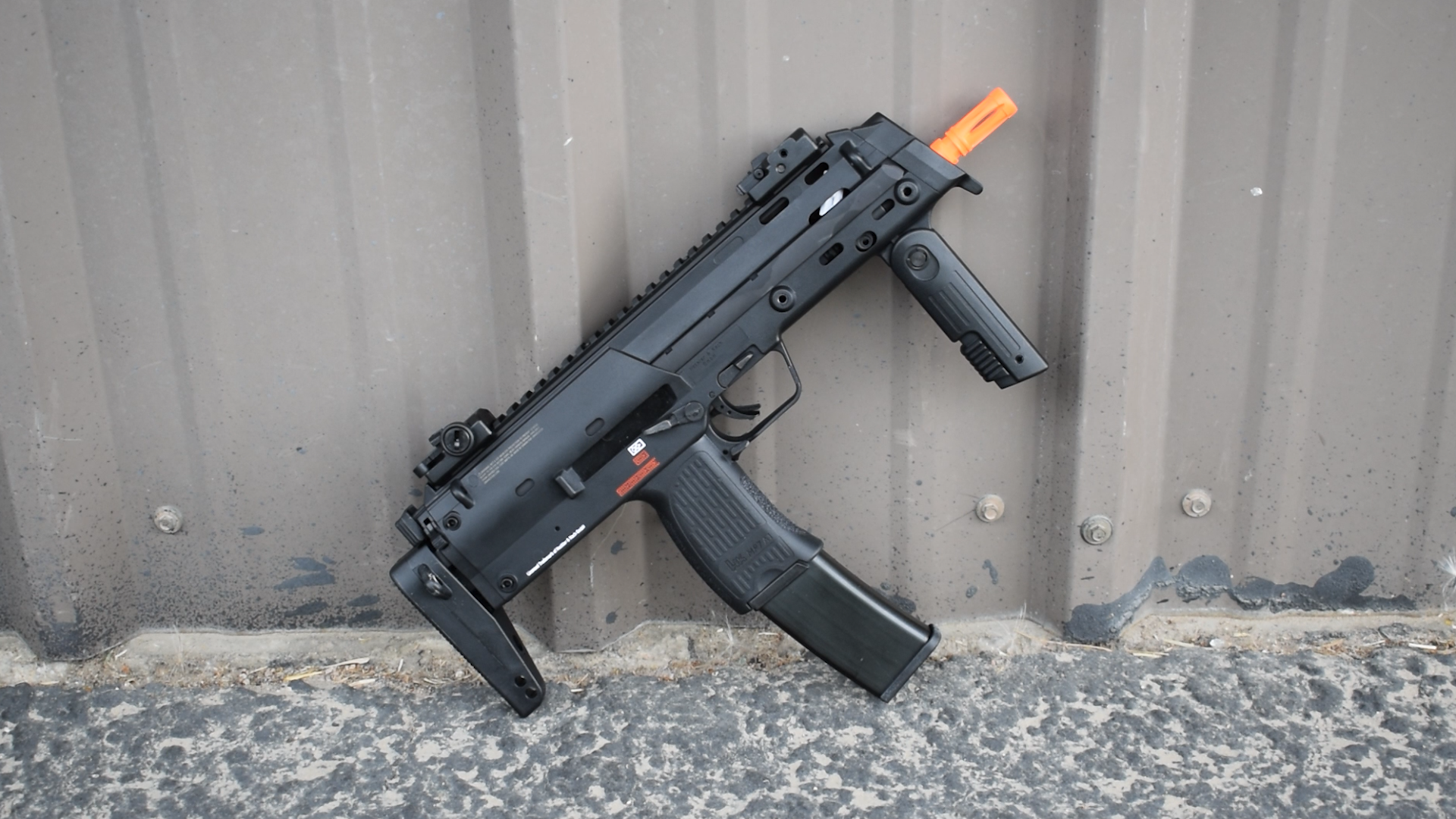 Now let's talk about airsoft guns. The MP7 style guns have been around for a little bit in the airsoft world as gas guns, low cost/low performance versions, or unauthorized replicas in the form of AEP (automatic electric pistols). The gas guns that are currently available are made by KWA and then later VFC which is more the correct size. Performance of gas blowback submachineguns is not too different from a pistol, but the bigger magazine and full auto, while fun, does make more apparent some shortcomings you typically experience with gas guns. Essentially these are not good for skirmishing for longer rounds because you have limited ammo, the performance suffers in cold weather, parts wear down faster on guns like these which have nice recoil and realistic function, and overall this limits how you can play. 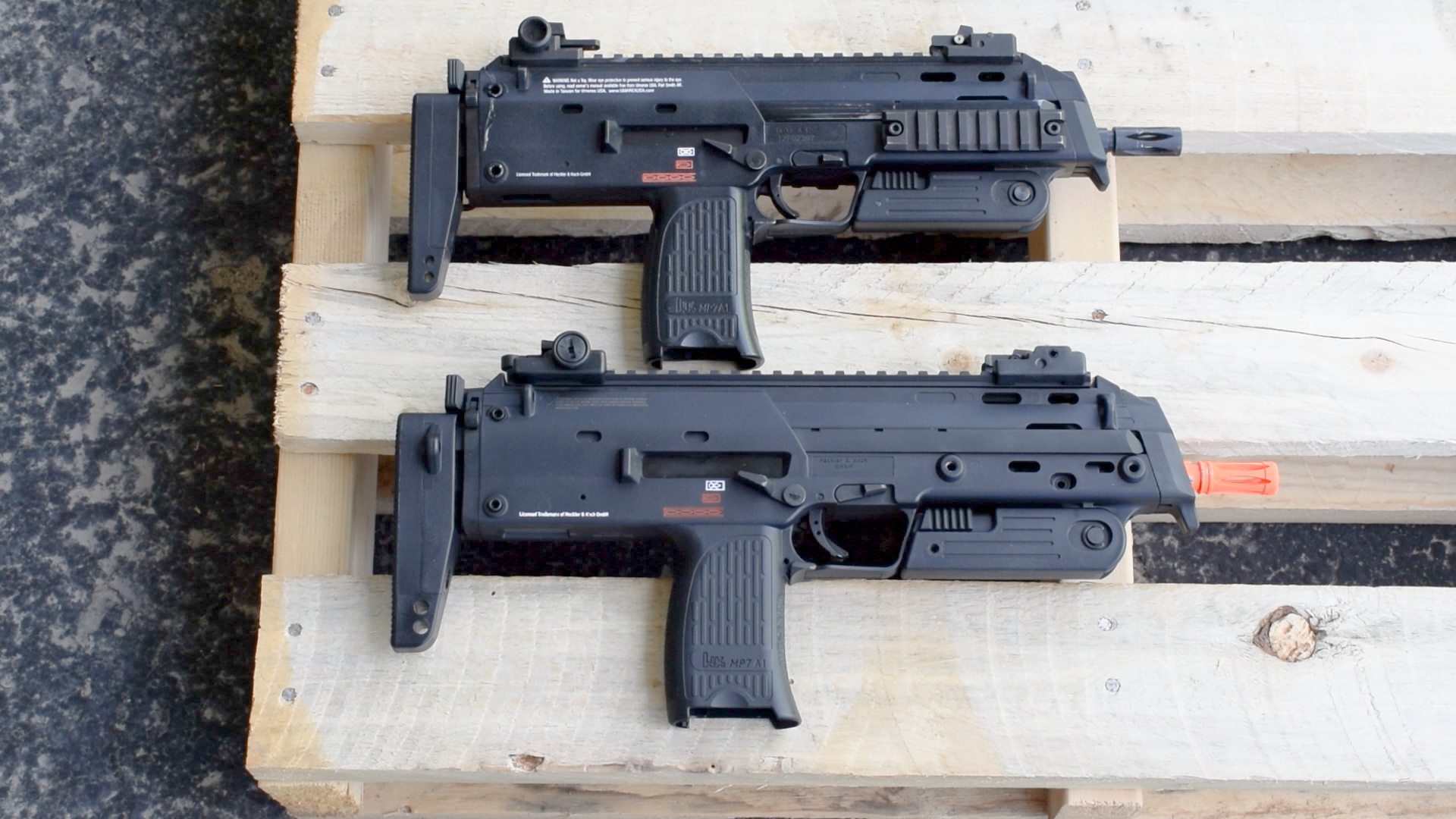 AEPs are a weird category on their own that is not popular here in the United States. You take what you know about a normal AEG (automatic electric gun), and scale it down substantially to fit the body of smaller guns. The gun performance is so-so and the rate-of-fire and trigger response leave much to be desired. Though they are often built to hold up pretty well, the overall performance is where you are lacking. A low cost LPEG (low-powered electric gun), aka the guns running off AA/AAA batteries that are almost always clear are terrible in terms of performance and not something you would want to take into a skirmish. And then there is the problem of scale too. For those who seek realism, with the exception of the Elite Force/VFC MP7 Navy gas blowback, all the other aforementioned MP7s out there are smaller than the real thing. This is not acceptable if you want to look legit.

You could win this gun!

So what is this MP7 exactly? Well, this is your first full 1:1 scale proline AEG option. For those who desire the most realism the scale is important. The next consideration that is important is the actual performance. Making a full-powered electric gun that resembles an MP7 is not easy, and VFC and Elite Force have achieved this perfectly. If you have not heard of VFC, that stands for Vega Force Company and they make high end electric guns and gas guns out of Taiwan. They partnered with Elite Force and Umarex internationally to bring us licensed guns like these H&K MP7s. 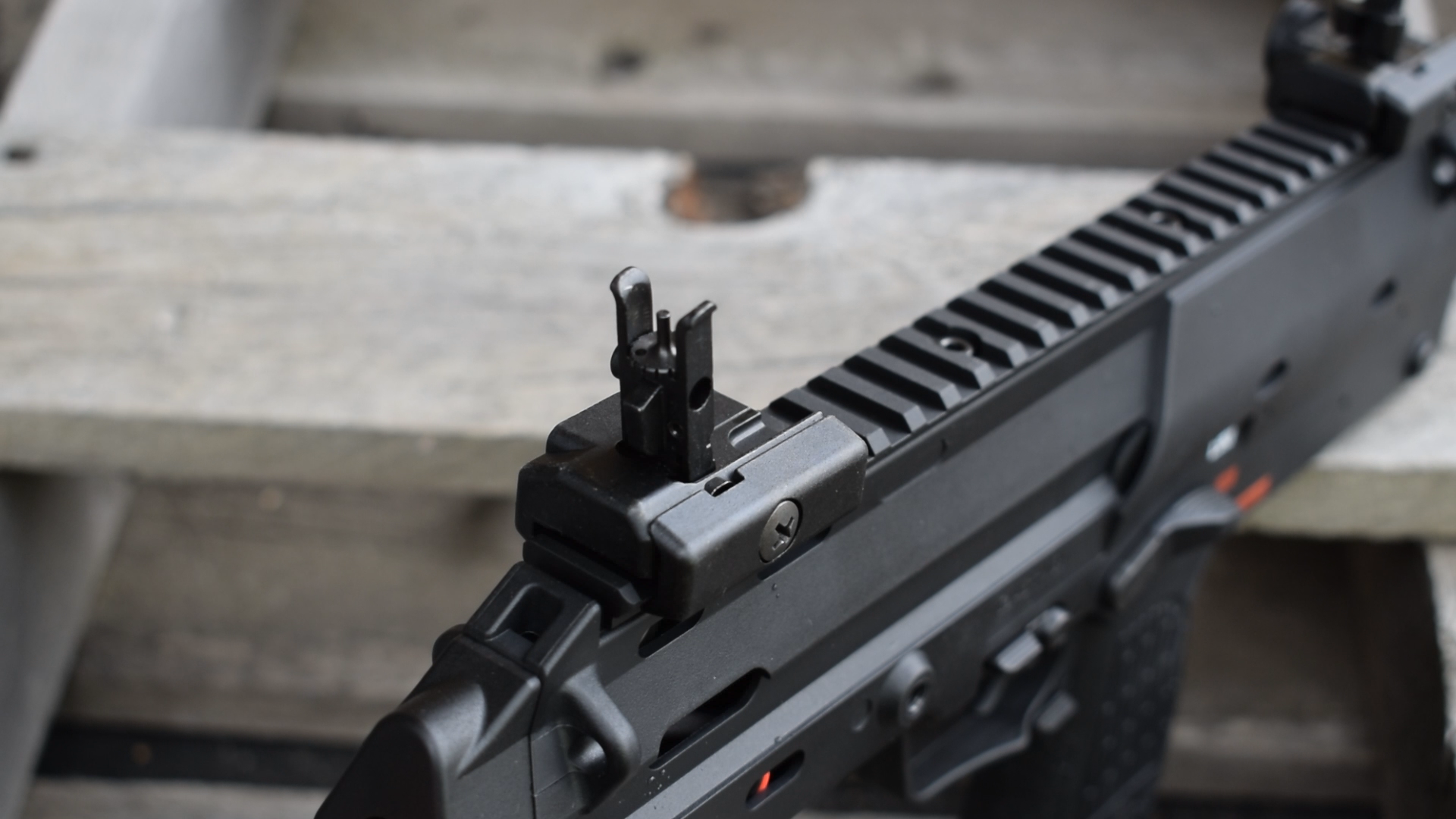 Starting with the outside, the MP7 is completely ambidextrous. There is an integrated folding front grip and the side of the body can accept add-on rails. The top rail is the standard picatinny type and it has flipping front sights which can work either folded or flipped up. The magazine is a 110-round mid capacity type. The stock is textured and can collapse and slide to a total of four positions. There are integrated sling loops through out for you to secure the sling. The charging handle exposes the adjustable wheel for the hopup. The front of the gun pops off to reveal the battery compartment. Ideally you will have to use buffer tube style short/slim Lipo batteries such as the Elite Force 11.1v 900mah Lipo. It is still a somewhat tight fit so be cautious about using a swollen battery. The barrel is threaded and takes aftermarket accessories that interface with a 12mm+ thread. This means any currently existing MP7 accessories work with this new gun as well.

Inside the gun is where the magic happens. The MP7 AEG uses a proprietary 8mm ball bearing gearbox to do the work. Remember, to be able to make this kind of gun you are going to have to design a completely new gearbox to make it work. People who require a gun to be compatible with everything will scoff at this and should stick to the M4/AK type of guns if they want that. The gearbox uses 8mm ball bearings which means it can handle some serious work and shoot very smoothly. This gun is pre-built for CQB, shooting at 330-350 fps with 0.20g BBs out of the box. It utilizes a factory installed 6.03mm tight bore as well. The gearbox has a quick-change spring guide so you can do some fine tweaking with different springs if you are brave. Accessing this requires popping the two pins in the back and removing the stock. The gearbox also has some nice electronics to give the gun some neat features. The gun has a MOSFET for protection, but the MOSFET also provides better electrical efficiency which makes the gun shoot a higher rate-of-fire and snappy in response. We tested it at 22rps with an 11.1v Lipo battery. The trigger response is good though the pull is kind of long. The accuracy is great thanks to the tight bore and the velocity is great for CQB and decent for mid-range engagements. Shooting the gun until empty will trip the last round cutoff which prevents you from dry firing the gun and simulates being out of ammo correctly. You need to insert a fresh magazine to continue or manipulate the functional bolt catch to signal to the gun that you intend to override this function or dry fire. 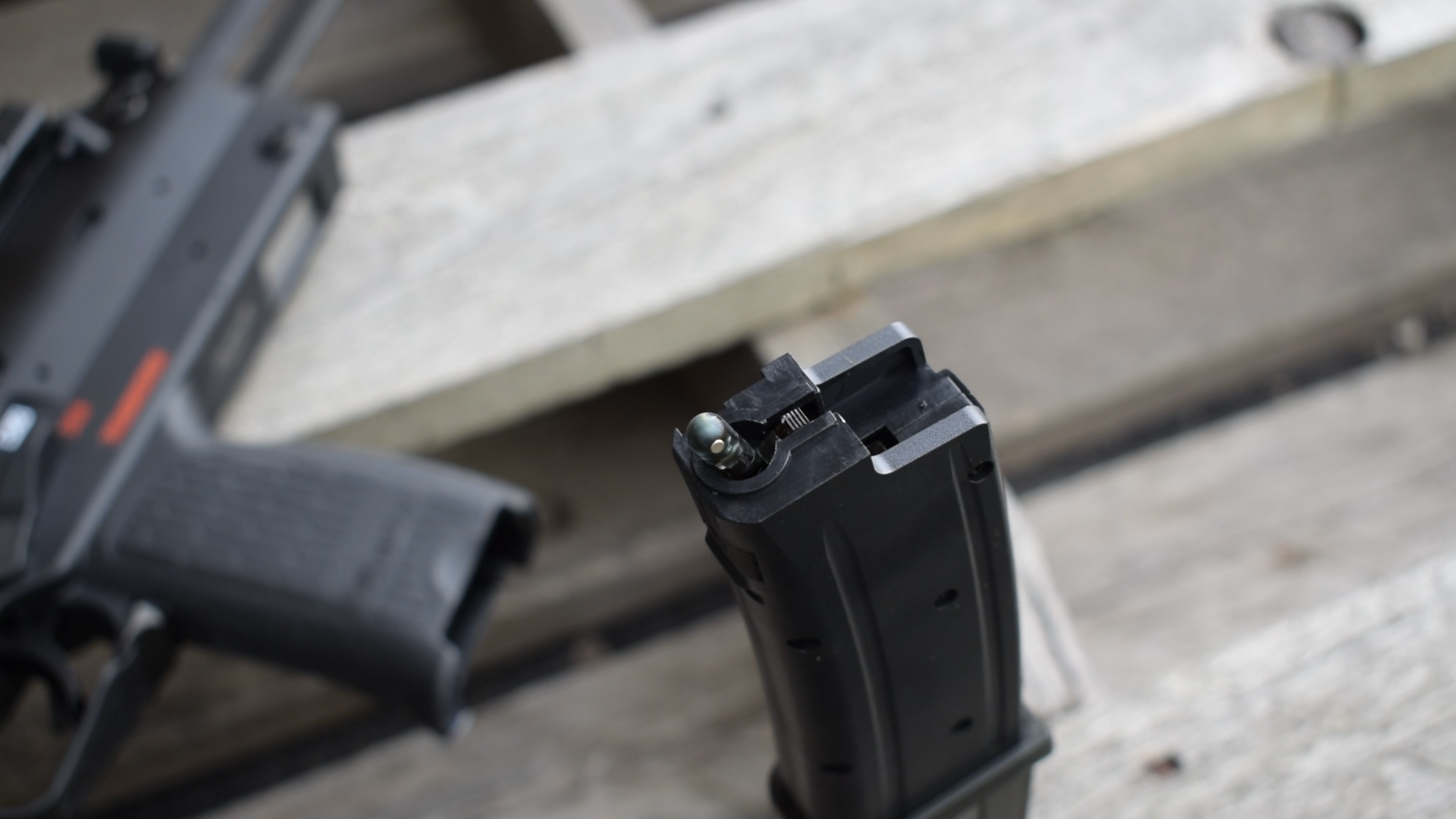 There are two things to note about this gun. The magazine contains a special follower that protrudes from the magazine when empty. This follower can be damaged if you insert the empty magazine back into the gun without pushing this down and locking it. The follower signals to the gearbox that your gun is empty. It takes some getting used to and if you are not careful you can break that part. I wouldn't say it's a bad design because there are other guns with protruding followers that have existed before. If you are intending to dry fire the gun this is the only time I could see this being a problem but as long as you are extra careful I think this is a minor quirk about the gun.

Next to that is the limited battery capacity. True to PDW form, this gun with the smaller battery is good for limited engagements. If you wish to run this hard as a primary, bring extra batteries and magazines. You can check in my video that I have rigged up an external battery box which will allow me to run this gun much longer.

Some additional good things worth mentioning: the weight of the gun is pretty nice and balanced, and not heavy at all. The gas gun versions tend to be very heavy toward the magazine making the gun feel weird. Then you have here all the practicality of an AEG which a gas gun cannot match for skirmishing. The magazines are less expensive, not to mention lighter and hold more ammo. The gun will be reliable as any top tier AEG should be whereas a gas gun will wear out fairly quickly when you shoot it the way you would want to shoot an MP7.

Moving past that, I think this high tech gun performs awesome and I can see a lot of people enjoying it, as long as they are the careful type. For people that are rough with their gear or are not very attentive, this is not a gun you can just grab and go. If that sort of stuff scares you I'd say you are better suited to an M4 or AK. I think this gun is awesome and the fact that it is a skirmishable MP7 replica is very exciting to me. As long as you have realistic expectations about what this new type of AEG platform can do and its limitations, I think you will be pleasantly surprised when this gun rewards you with speed, maneuverability, and performance. Whether you want something different or exotic or you are trying to complete a certain loadout, the MP7 AEG is good to go.

Check out the MP7 here!