Most airsoft fields in the US report that most of their player base is made up of teenagers and young adults. This is mostly due to the fact that airsoft is a relatively inexpensive hobby compared to other sports.

Want to know more? If you're a concerned parent of a potential airsoft player or teen who wants to learn more about the legality, age restrictions, and safety of airsoft we will tell you everything you need to know below.

If you're shopping for your first airsoft gun, checkout our starter kits here. 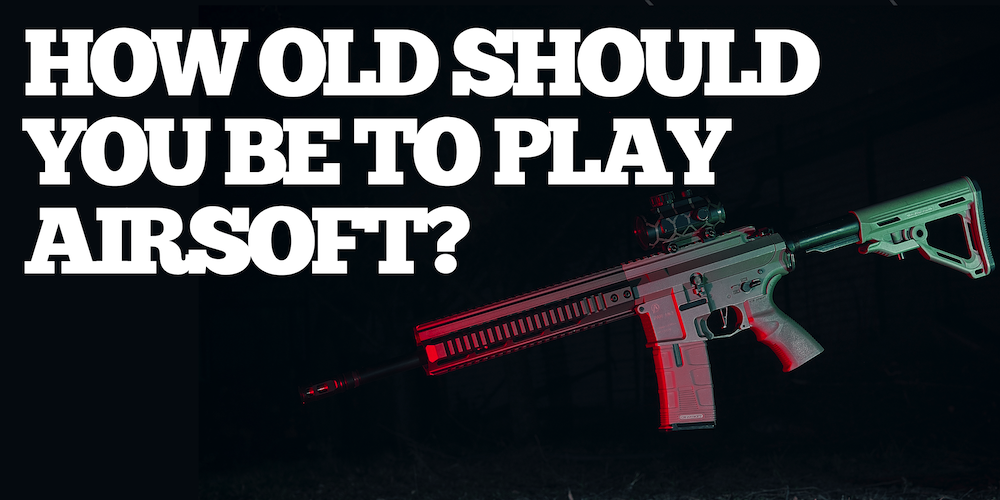 Airsoft is a game where players compete against each other using replica firearms called airsoft guns. In these games player will aim at targets and try to hit them with spherical plastic (BBs) projectiles which are typically lightweight plastic BB's.

These BB's are shot by replica guns called airsoft guns. Airsoft guns don't usually leave visible marks on the players and it's not always obvious when you're "hit". However, sometimes the BB can bruise the skin, especially at close distances, so the game relies on an honor system. In most game scenarios, players who've been hit must call themselves out by saying "hit, hit" loudly so the other participants can hear.

I wouldn’t recommend playing airsoft with children under 10 years old because it could lead to serious injuries. However, if you are sure your child is mature enough to handle the risks, then go ahead and give them a try.

It's best to start somewhere safe to learn the gun operational mechanics where you won't be shooting near other people. Always wear safety gear when practicing.

The types of airsoft gameplay vary greatly depending on your interest level. Here are the most common ones we see:

- Police Training: Some police and military units use airsoft to train based on the realism of the guns and sport

While you can play airsoft indoor or outdoor you should not play in your house or a finished building not designed for airsoft games. This is because airsoft BB's from airsoft rifles can damage windows, drywall, and plaster.

At What Age Should Kids Start Playing Airsoft?

Airsoft guns are not real guns, so technically, any age is suitable at our fields in Denver, Colorado the minimum age is 10 years old.

Laws and regulations do vary by city, state, and country though so it's important to check out your local regulations. We typically recommend kids only play in protected areas or fields. Since airsoft guns are replica firearms they can come across as scary.

In many states you do have to be 18 or older to purchase an airsoft gun . However, there are laws that regulate the sale of airsoft guns to minors. If you're planning to buy an airsoft gun for your child, you should check if the state where you live has any restrictions on the purchase of airsoft guns. You may also need to sign a waiver every time your child goes out skirmishing at a local field.

Teenagers: How Old You Have To Be to Play

If you are under 18, you are allowed to play airsoft. You may even own an airsoft gun.

Airsoft is not regulated by the same laws as real firearms. You don't need to fill out any forms or get any licenses or pass any background checks.

One very important distinction to make between toys and airsoft guns is that Airsoft guns are not toys. They are considered firearms under federal law. These guns are designed to fire plastic pellets at high speeds. They are often used recreationally and can cause serious injury if fired at another person, especially if they are not wearing proper face and eye protection.

At Fox Airsoft we're committed to letting everyone play airsoft safely. That is why we have created this airsoft safety checklist to make sure everyone with an airsoft gun is safe.

1. Wear face and eye protection at all times.

The most common injuries with airsoft guns come from people not wearing proper ANSI-rated eye protection or face coverings. Since electric airsoft guns can be powerful it's possible they could chip a tooth or hurt your eye. This gear should fit snugly and be rated to withstand an impact.

Since airsoft BB's can travel at a high velocity they can leave marks or bruises. Having protection will help reduce or eliminate these potential minor injuries.