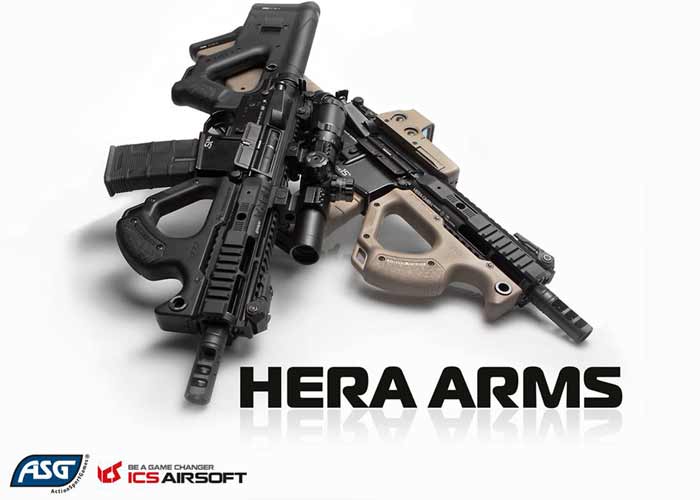 When you first look at the ICS Hera Arms CQR, it immediately stands out among the many types of M4 variants out there. This AEG is based on the traditional inner workings of the ICS proline AEG split gearbox with an enhanced ergonomic package that looks out of this world by Hera Arms. Starting at the front, you have a short barrel configuration with a unique picatinny rail with Hera markings. Attached to it is a PDW style grip reminiscent of the P90 submachinegun. Moving back you get the familiar AR-15 style receiver so handling this gun is no different than any M4/M16 type gun. Towards the back you get a fixed position thumbhole style stock from Hera. The length of pull can be adjusted by adding or removing spacers which are available separately through ASG. Up top you have folding polymer sights which can be found on other ICS proline guns as well. All in all, the gun is very futuristic looking with consistent design language throughout, although it may be busy for some. The nice thing is that for those who are used to the more common M4 but want to try something different, this isn't too big of a step in another direction where you would start to shop for entirely different magazines and batteries to make this usable. This gun feels very solid. That is usually said casually but for this gun, I seriously mean it when I say it is a stout feeling airsoft gun. There are no wobbles and the short length of the gun centers the weight so it feels substantial in your hands. If the looks are not your cup of tea, the gun may seem heavier for some players. This gun is a solid performer aside from that, so this gun will serve you well out in the airsoft field. Out of the box it is shooting around CQB velocities though with the ICS split gearbox you could change out the spring and up the velocity to outdoor field limits very quickly. If you have to get to the split gearbox, you would have to open this AEG up like you would a real M4 variant, which is by pivoting the upper receiver to access the innards. This is made slightly more complicated due to the Hera front grip sitting where it does. You will have to remove or slide forward this grip to pivot the receiver and access the gearbox.

What else can I say about the gun? Radical ergonomics aside, the gun is a straight forward piece and is as much a winner as any other ICS gun you get. The quality is always there and the uniqueness of this piece is sure to standout. A funny side note is the absurd amount of sling mounting points that appear on this rifle. I guess the Germans really want to make sure you can sling the weapon any way you can conceive. 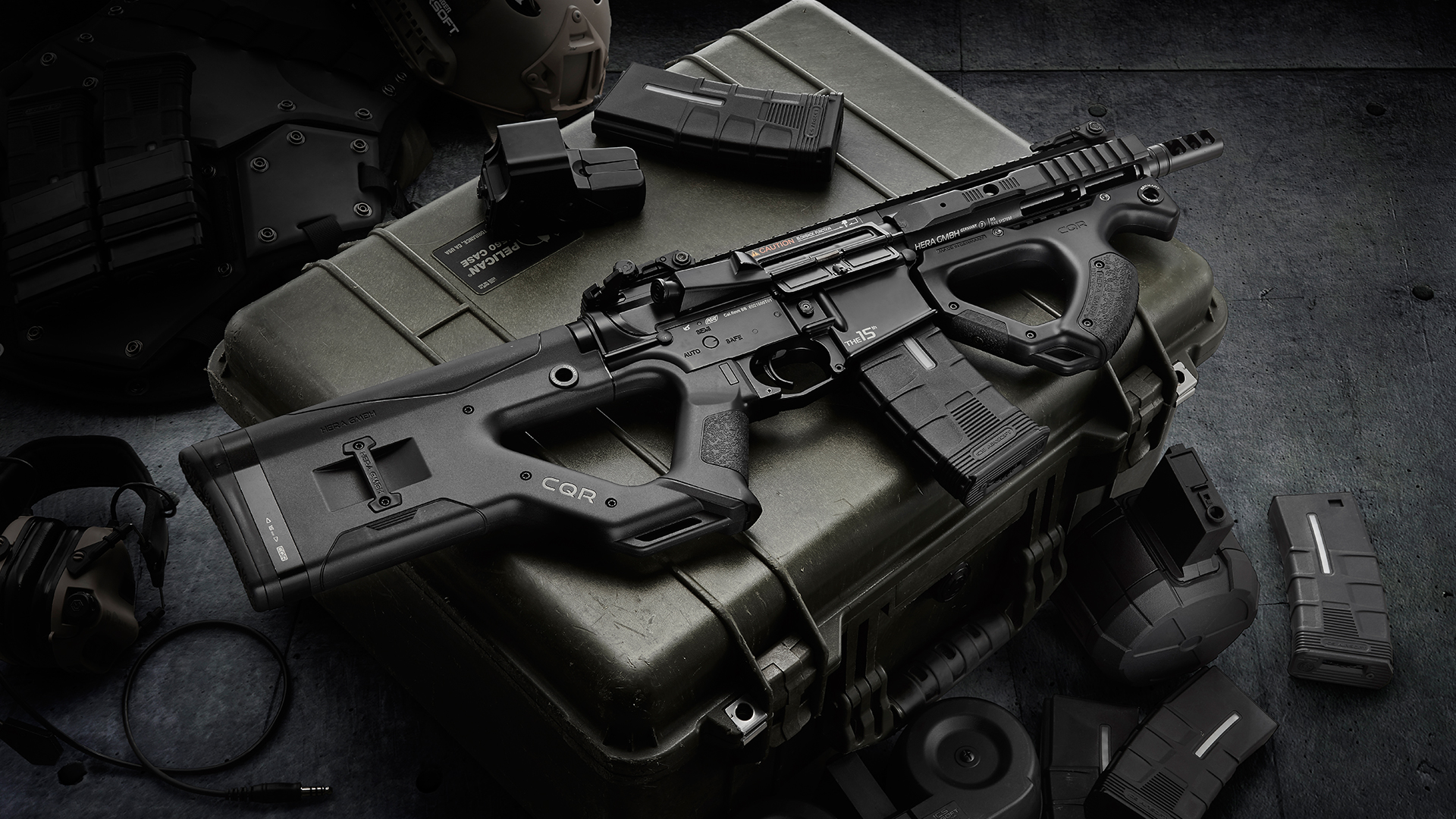 ICS has been around since the early days of airsoft and is a well-established company. Just like the handful of other manufacturers that were around in the beginning, they originally based their designs based on Tokyo Marui's AEGs but they had always differentiated themselves by giving you more for the money. Their early guns were all full metal variants however in recent years they started to offer sportline versions of guns as well. One of the major features that ICS has that sets them apart is the split gearbox design available in certain variants such as the M4-style guns. The split gearbox has a distinct advantage over conventional AEGs. Conventional AEGs feature a gearbox that is pretty much like a contained unit that houses the gears, compression parts, and electronics. Taking apart a gun down to the gearbox is a very involved task. With an ICS split gearbox, the gearbox is separated into to halves. As a result, taking apart the rifle is similar to field stripping a real AR15/M4 rifle and the upper gearbox even slides out. The upper gearbox houses the compression parts while the lower gearbox that sits in the lower receiver houses the gears and electrical parts. Maintenance, upgrades, and repairs are easier to perform and it is easier to diagnose problems.

Their proline rifles are among the best. I would easily stack them up to Krytac or VFC. 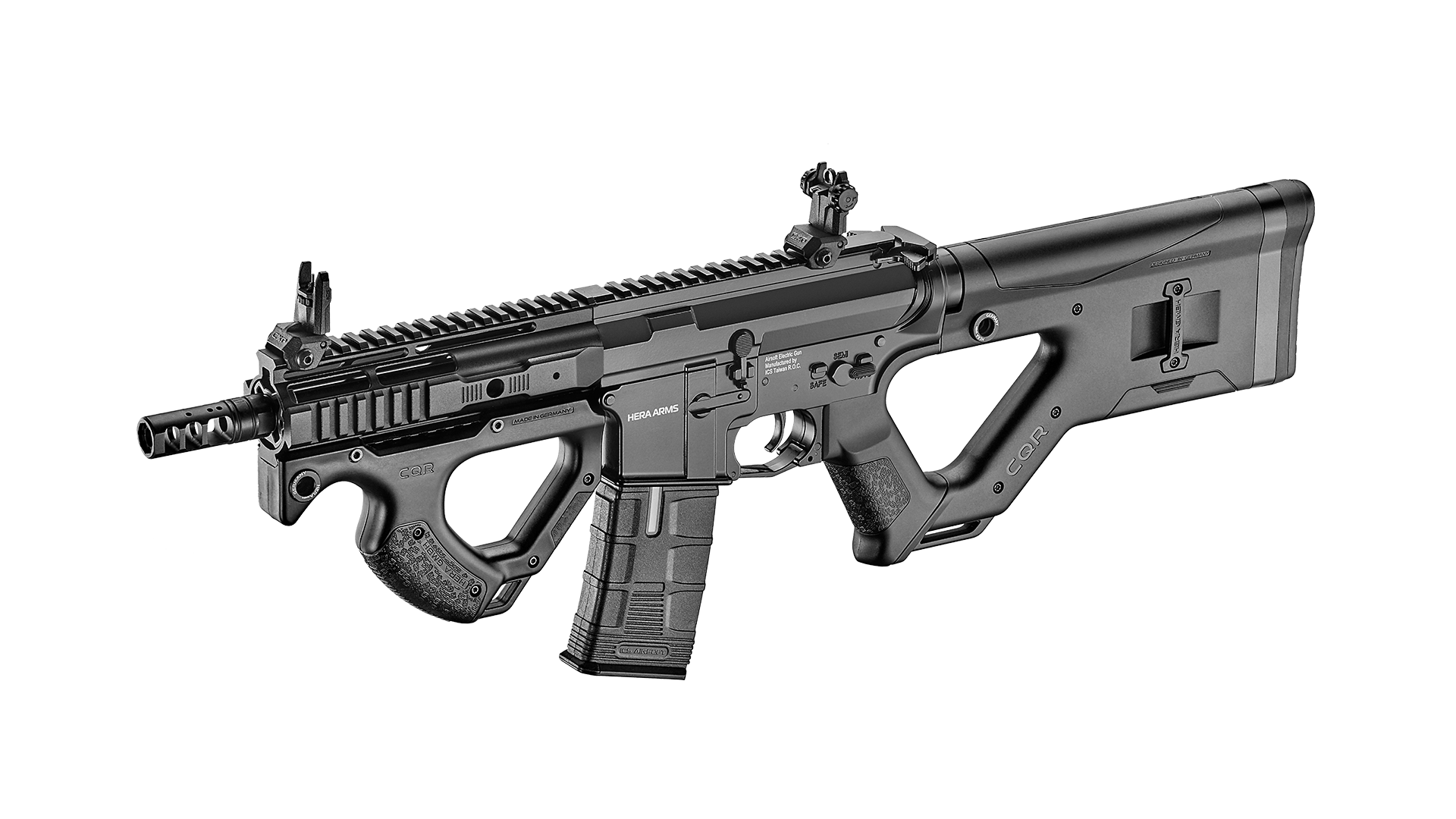 At Fox we had always offered ICS guns directly from ICS. Action Sport Games has recently partnered up with ICS to be a US distributor. This allows us to get ICS products more reliably. Up until now, ICS was almost like one of the best kept secrets in airsoft. Once you pick one up and use it you will fall in love with their AEGs.