Hello airsofters! In today's blog I want to talk about the updated MLOK M4 Competition guns, namely the CQB and CQC models. There will be a little confusion here as Elite Force currently offers the "older" models too which are the regular Elite Force M4 CQC Next Gen and CQB Next Gen. These guns are all built in partnership with Elite Force by Ares.


What's New on these rifles?

These models will now feature an M-LOK rail to keep with the times and give you a modular accessory mounting platform. M-LOK is a licensed accessory mounting form factor created by Magpul Industries to allow for a streamlined and low profile mounting system. This is similar to the concept behind Keymod, except it is a much simpler shape and makes manufacturing a lot simpler. 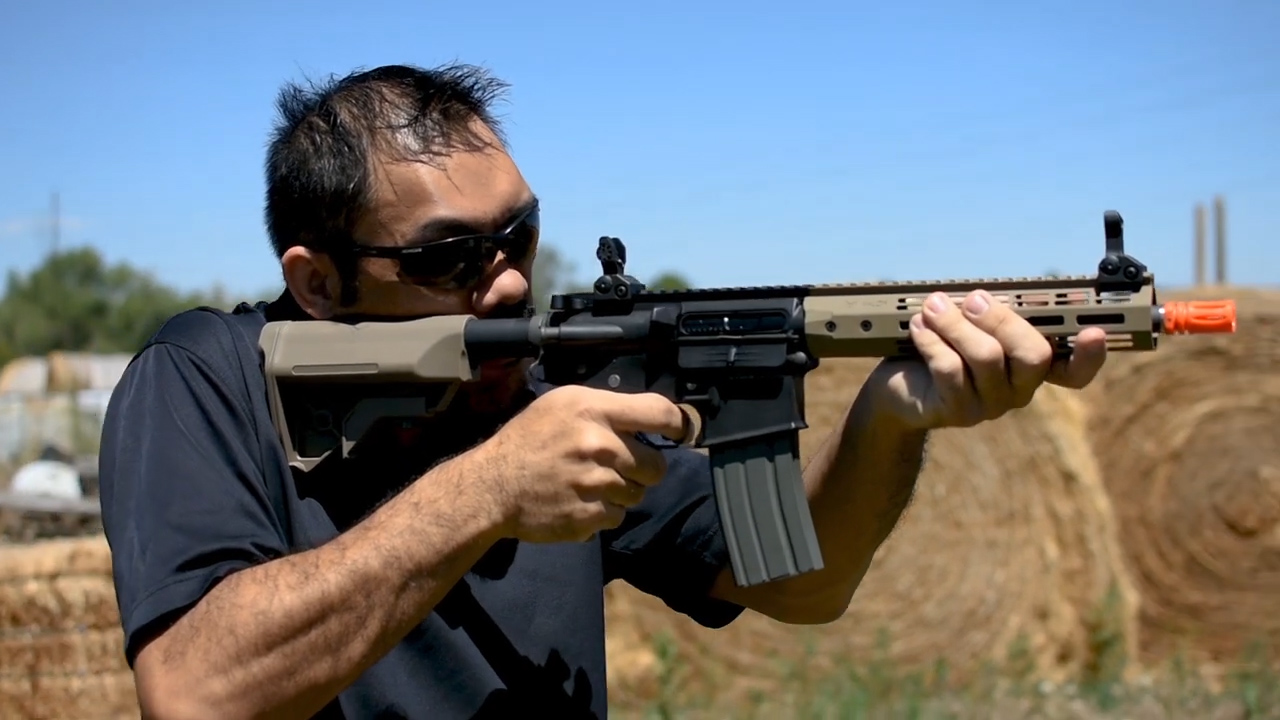 These rifles now only come in one color scheme: black with tan furniture. You also get some polymer flip up sights which are not adjustable. These sights can be deployed very easily just by pushing each sight upward. They do not lock which prevents them from getting accidentally broken f you should accidentally bump it. There is a fair amount of tension built in so you get a positive click whether you put them up or down.

Inside the gun is the newly updated EFCS gearbox from Ares. This is the gearbox that originally appeared in the MCR model, which is the top of the line for the competition series rifles. This is fully programmable when paired with the Ares programmer module. This allows you to adjust what your selector position allows your gun to do such as shoot burst mode or limit the gun to firing semi-auto only. It also has a very light flat trigger which is comfortable to use. The gearbox itself has a quick-change spring guide for you to upgrade or downgrade your gun as you please. This is mostly based around a version 2 design with some changes to accommodate the EFCS but your usual parts such as the piston assembly, piston, and gears are all version 2 style. If you wish to upgrade the gears for any reason though, you will have to borrow the magnet that is installed in the original spur gear. That magnet interacts with the cutoff function and you will not get reliable semi-auto fire if you omit this from the install.

Elite Force has also finally added a metal sling loop behind of the receiver in case you want to run a single point sling. Normally this is a few bucks to upgrade so it's nice to finally have it out of the box from them.

The CQC and CQB models are currently being offered which is comparable to a short-length M4 and a stubby one. The short length version is the CQB model and is suitable for indoor or outdoor play. The CQC model is the stubby one and its compact size makes it ideal for indoors close quarter play. Both models are well suited for their intended environments though with the quick-change spring system you could tune your guns to how you want to use them pretty easily.

The performance as we tested it is good. Numbers remain the same leaving the performance relatively unchanged from the "older" version.

(These chrono results are from our in-house verification)

One thing we spotted that is worth noting is the complete redesign of the hop up chamber. Elite Force has moved away from the 1-piece design and instead opted for a proprietary 2-piece design. It is hard to say whether or not it makes sense at this point. This presents some challenges to upgrading. If your intention is to upgrade your gun little by little keep in mind that hopup components will be proprietary. The bucking and barrel are both standard so you can replace them with an aftermarket option as you see fit. The gun as always shot consistently both in FPS and in accuracy out of the box as did its predecessor.

The CQC model features a conical flash hider just like the older model. It might function as the orange tip but it also serves as a noise amplifier. This makes the gun very loud when firing which can be intimidating to others in CQB. The noise amplifier sits slightly into the handguard making it look integral to the rifle.

Are these guns worth getting? I think it boils down to whether you want the new MLOK version or older style guns with the Picatinny rail. The performance is just about the same so you have to decide if the small upgrades inside are worth the added cost. This gun has a refreshed look. All in all the Elite Force Competition line is a trusted series of guns no matter how you cut it so go ahead and buy with confidence.