Hello readers, this is Matt Meraz with Fox Airsoft again and today I'm here to answer the question of "What is a Proline gun" and why is it so much more expensive than a Sportline gun. The simplest answer is that in a Proline gun you are paying for a lot of the external fit and finish, higher quality control, and nicer internal fit and finish on a rifle that's upgraded versus a Sportline gun. If the gun is a replica of a real firearm model you might also see some licensed trademarks too. Most Sportline guns are going to be made of a polymer construction on their body where a Proline gun is going to have the same metal construction as the real counterpart of a given rifle. If the real gun is mostly polymer though, a Proline version of that will feature a really dense nylon fiber and a Sportline edition of the same gun would be merely ABS plastic which is weaker and has a cheaper appearance and feel. When we talk about metal content in an airsoft gun, we use metal as a loose term. There are different grades of metal. Proline guns typically use a high grade of aluminum that's very strong and it's going to hold up to a lot of abuse. Cheaper guns advertised as full metal will often use lower grade cast pot metal which certainly adds the weight (in some cases more than realistic) but these grades of metal are often weak and can still break. So just because something is metal, does not make it Proline just by that. 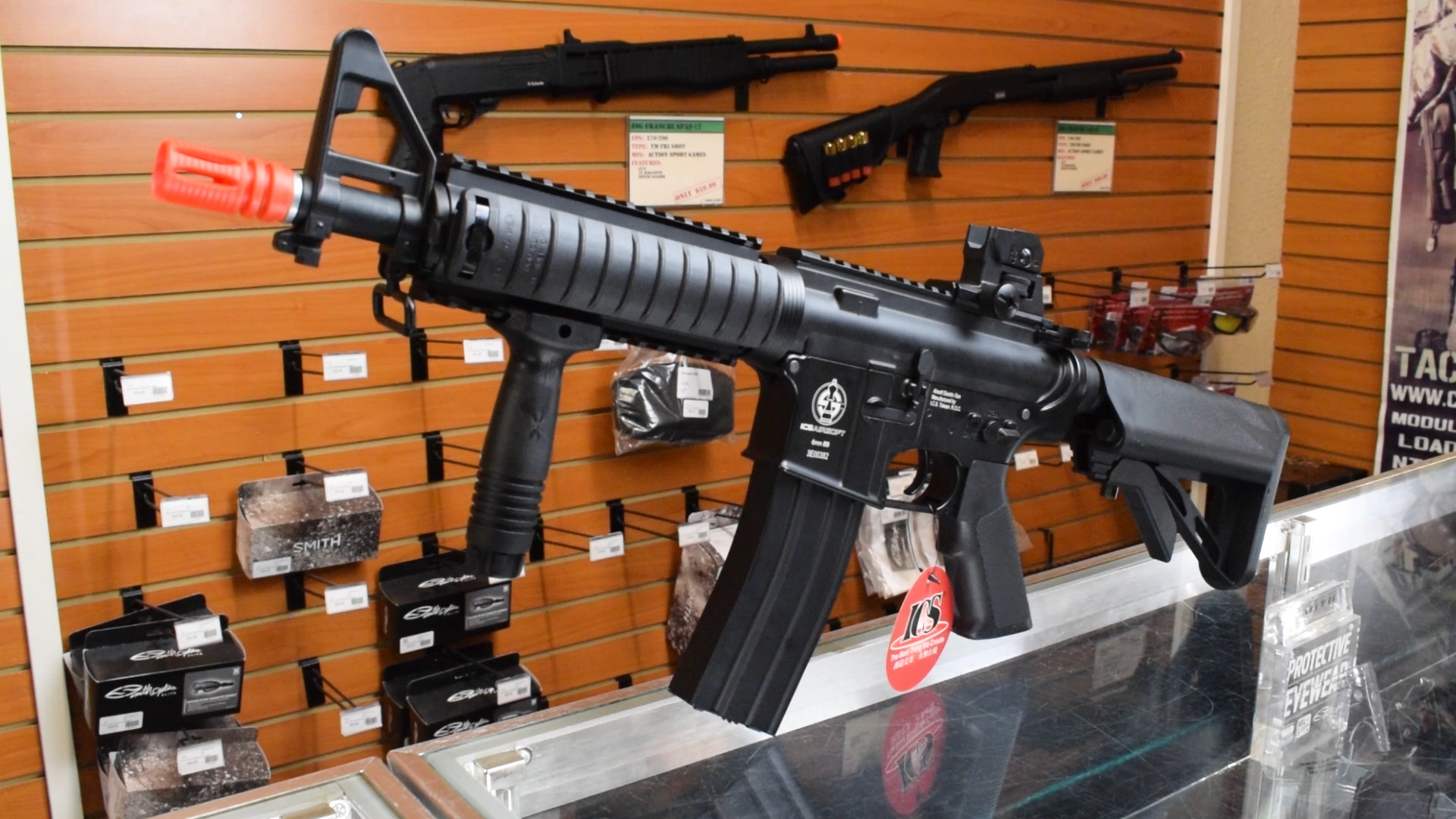 Now the other things you're going to notice in a Proline gun, typically you are going to have a great fit and finish for how the gun is built and often they might come with realistic trademarks. You are going to typically have other external features like flip-up battle sights, a more advanced rail system, a nicer stock, etc. A lot of these things that just make the rifle feel more complete and feel more like a real rifle.

So when I first started playing, I had a composite gun. The gun held up fine, I was not too abusive on it so the gun lasted me and did not break because I was reasonable with how I handled it. But when I touched the gun and felt the plastic body, I later wanted something that felt a little bit nicer. And so then it was at that point I moved up into a Proline gun, and I loved it. It's something I would never go back from. 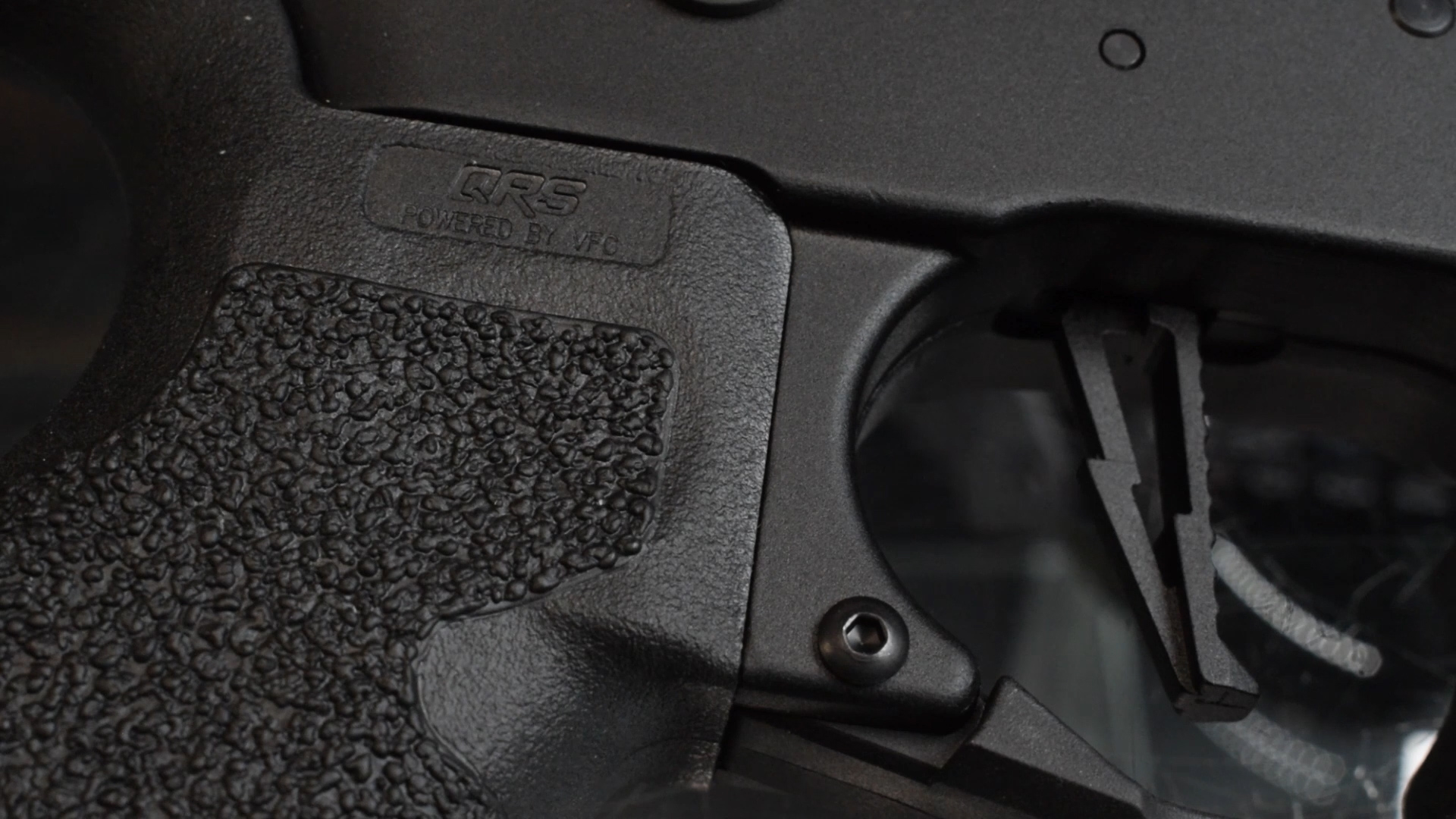 For performance, you might be surprised to find that in a Proline versus the Sportline rifle, both types of guns shoot very similarly. But with a Proline rifle, they typically shoot a little bit crisper. They will have subtle performance or component upgrades that will result in these guns shooting more accurately and with a better response and cycling compared to a less expensive gun. They might also have some electronic fire control units built in as well too. So you're going to get a little bit better performance out of them compared to the Sportline rifle but at the end of the day they will both shoot BBs and a Sportline gun can shoot at the same velocities as a Proline gun and once the BB leaves the barrel you won't see much of a difference outside of accuracy.

Click to check out the Umarex H&K G36C Elite 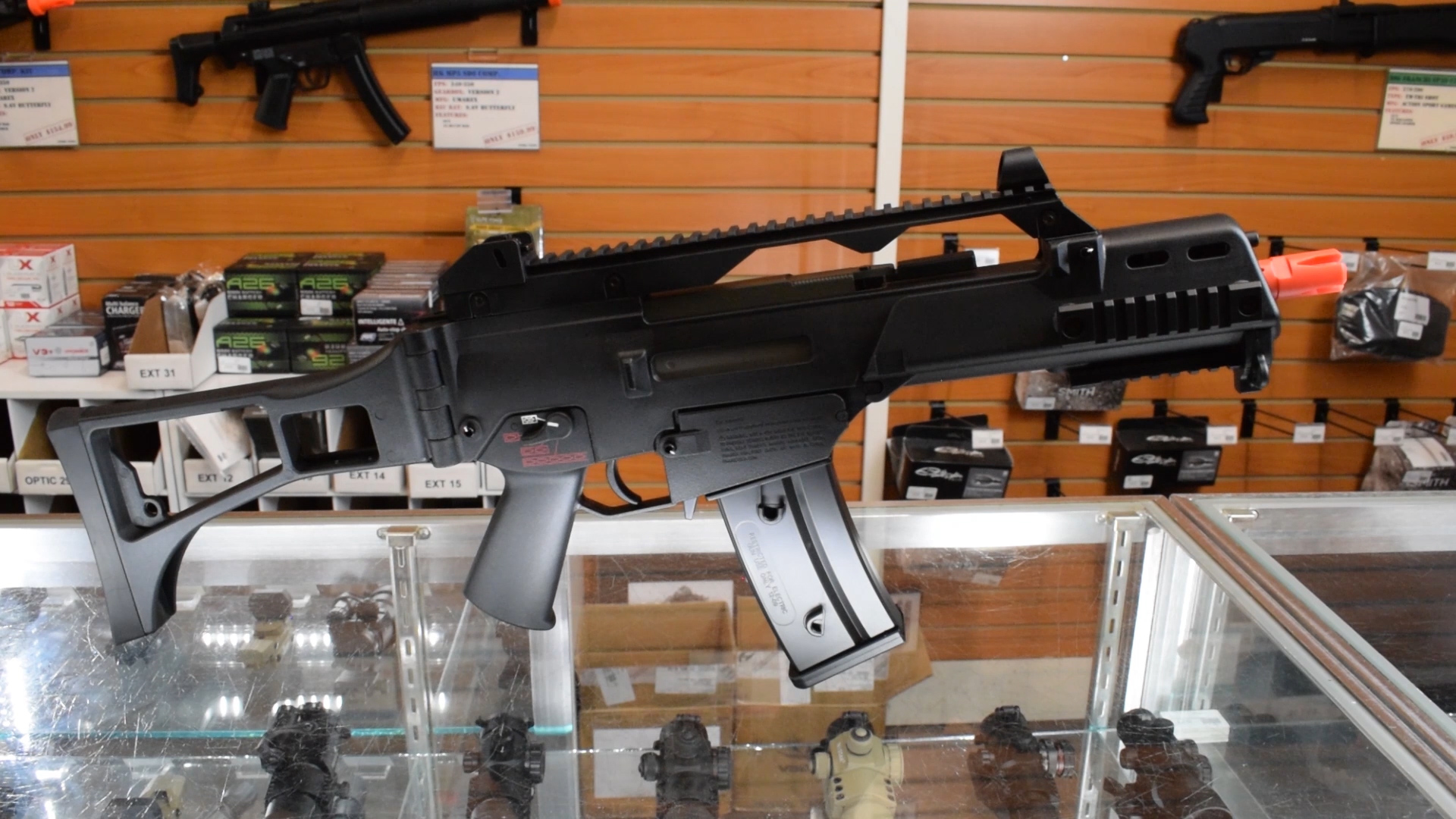 So you're paying for those extra features, and that's where the price discrepancy comes from. Like anything you see, when you're purchasing it, typically you get what you pay for. So if you see a gun advertised, it's full metal, and it's 80 bucks, I would be wary of that. These guns will use the lowest grades of metal that will break just the same as polymer if you are not careful with it and their quality of workmanship or lack thereof will usually show.

Now the life cycle on a Proline gun internally, is going to be about the same as a Sportline rifle. That means your internals are going to produce wear and tear over time. And we recommend or typically see about 25,000 rounds or more before you have a maintenance interval. So the additional money that you're spending on the gun is not to change that. That's going to be a factor whether you're on the Sportline or the Proline rife. To put a gun's lifespan in simpler terms: A gun costing 3 times as much is not going to last 3 times as long but the ride going thru the gun's life cycle is going to be much smoother. 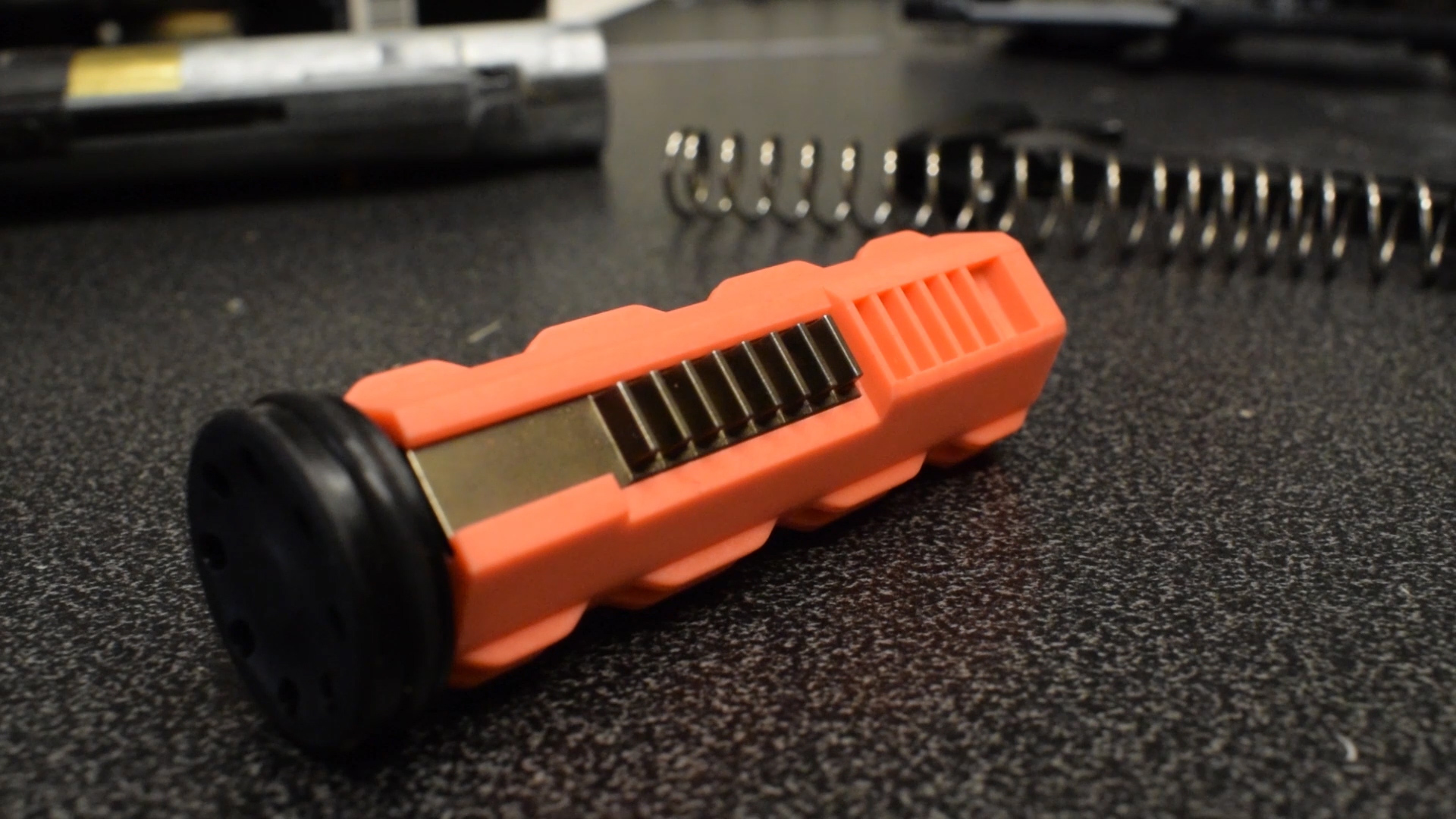 I'm often asked if I should start with the Proline gun or the Sportline gun. Well the first question you want to ask yourself is, what is your budget? What can you afford? And then, do you want something that's going to feel really solid in your hands? Because that's where your extra money is going towards. It's for that feeling. In terms of operation however, it will remain very similar to the Sportline rifle. 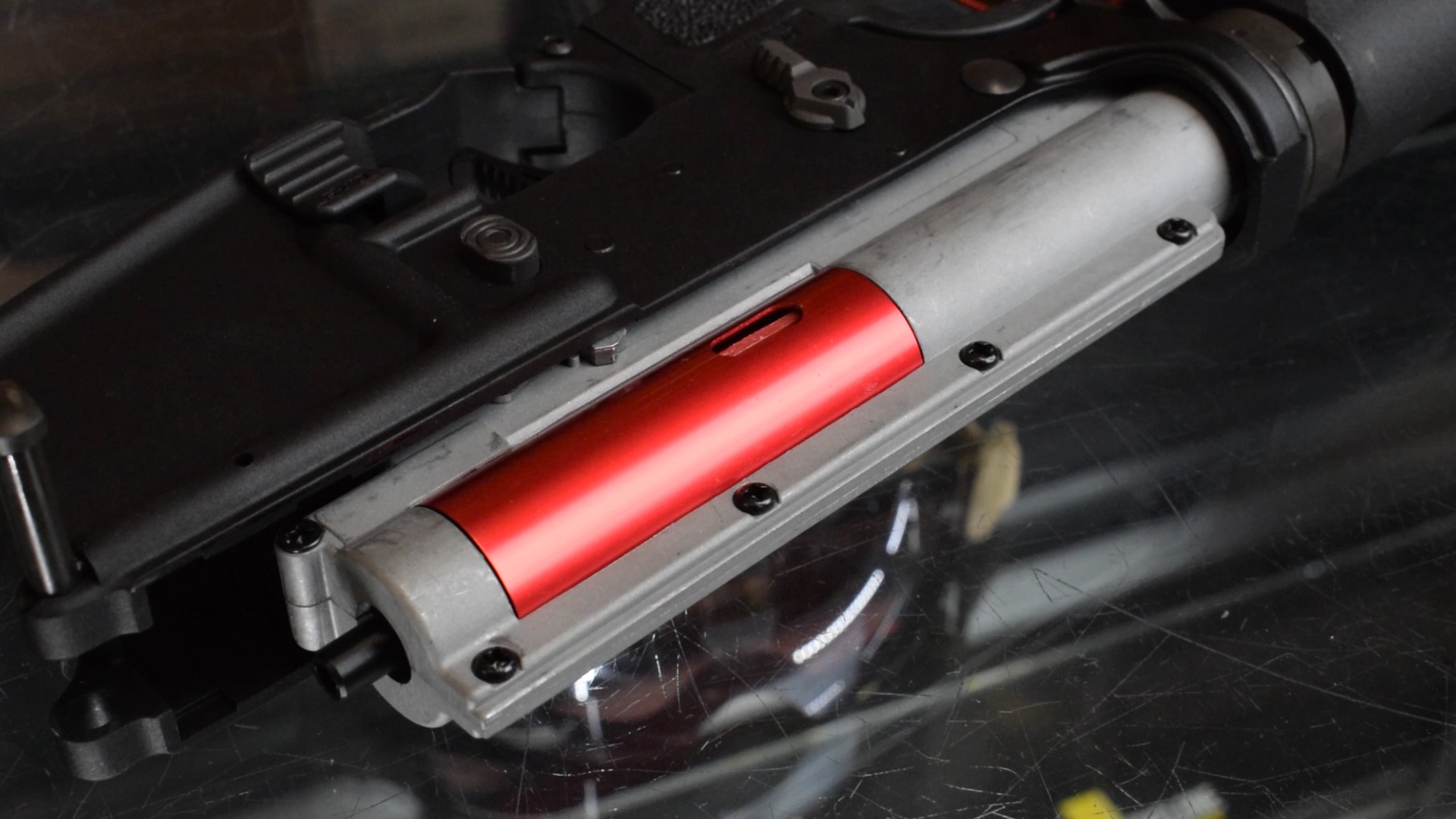 Another question people ask is, why don't these guns come with anything, like a battery and a charger? Well the simple answer is, typically by the point you buy a Proline gun, you probably already own an Airsoft gun and you might already have a battery and a charger. So that's something that the manufacturers are not adding additional cost in there for you to purchase. The other reason is, people at that level, typically use two different types batteries. They either use a lithium polymer, or a nickel metal hydride and so it depends on what you want as a consumer, how you want to set up your gun. Beginner guns may sometimes come with a standard battery and charger, but those are just the bare minimal items and are not performance oriented. 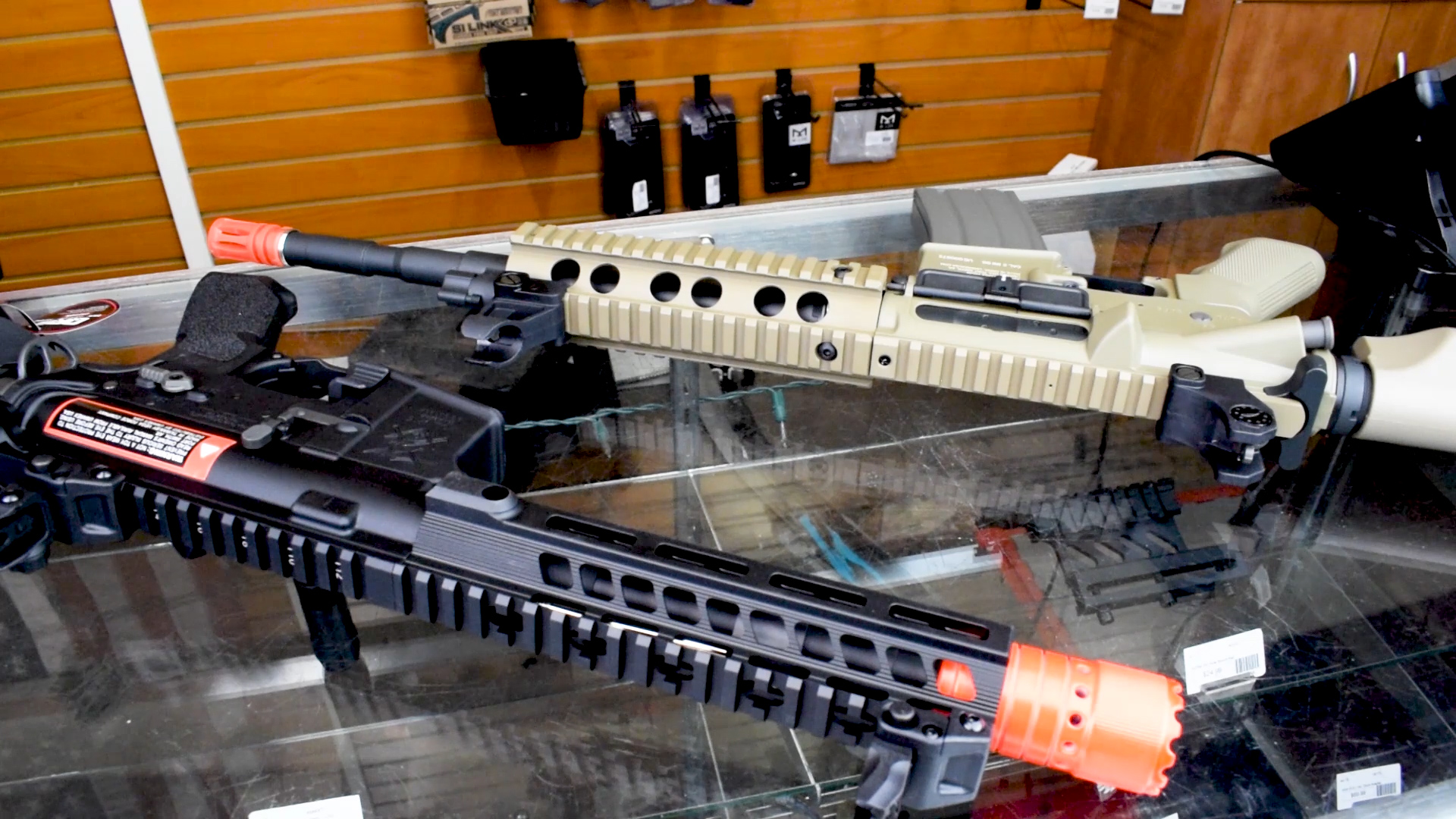 If you're teetering between a Sportline and a Proline rifle right now, just ask yourself, what do you really want? If you want to be playing Airsoft for a long time, and you want the feel of something very rigid that has a very high quality fit and finish, absolutely go with the Proline rifle. You're not going to be disappointed, and you're going to have a lot of fun with that gun for years to come.