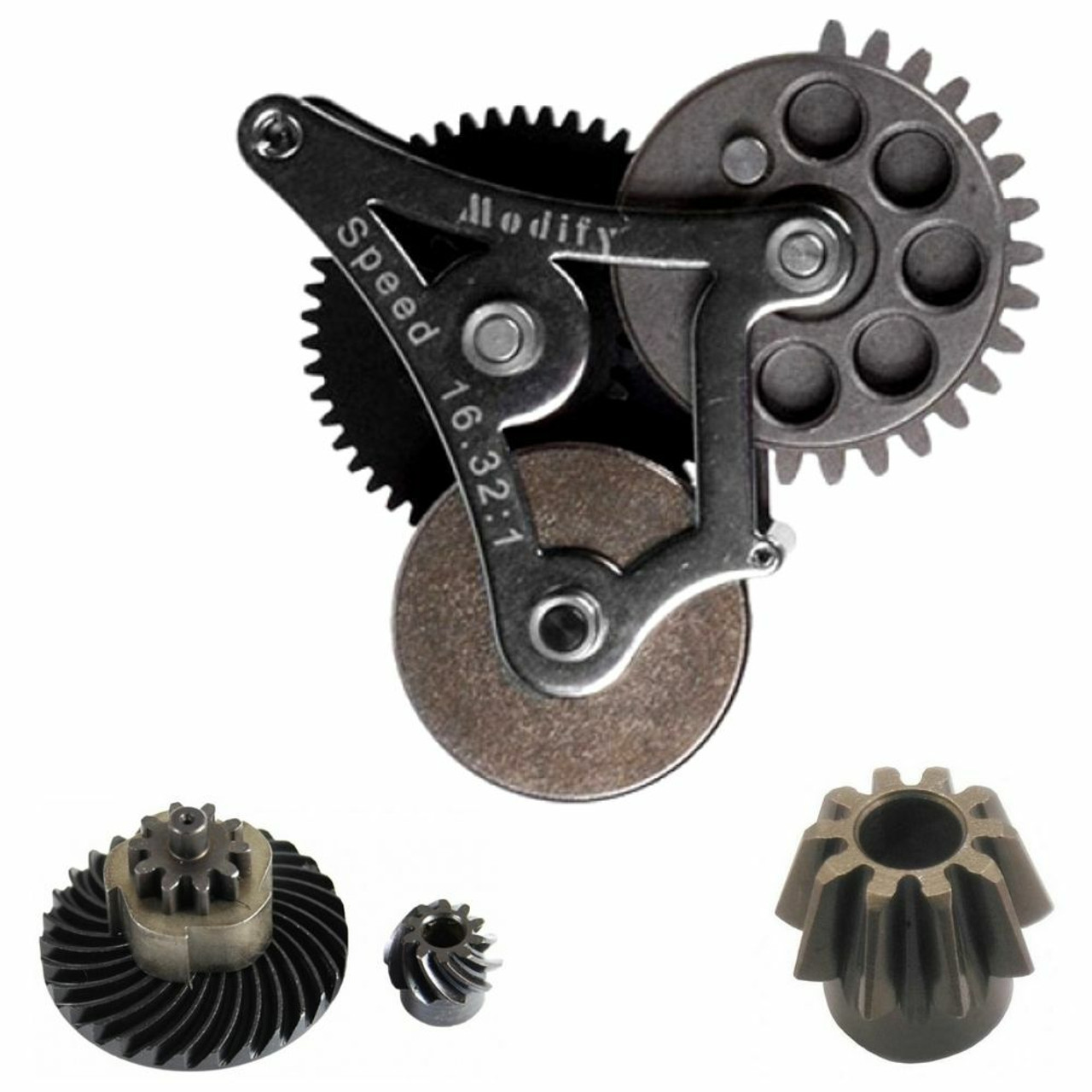 Checkout our selection of Electric Airsoft Gun Gears and Gearsets below!  Click Here to Learn About Airsoft Gears!.  Have questions?  Give us a call at 888-316-7816

The gear set is the system of gears inside the mechbox that is turned by the motor and cocks the piston. Almost all AEGs will use a 3-gear system with the exception of a few designs, but for all intents and purposes we're going to talk about the most common ones which have the sector gear, spur gear, and bevel gear. The motor itself has a tiny gear called the pinion gear and it is the first gear to interact with the gearbox to turn the bevel gear. The bevel gear transfers torque to the spur gear. The spur gear turns the sector gear which cocks back the piston and releases it, as well as manipulates the position of the tappet plate and air seal nozzle. Installing a gear set requires a higher level of work. If you do not feel comfortable tackling the installation, we do offer tech services as well.

Q: How do I change my rate of fire?
A: Rate of fire is typically going to be affected by the type of spring in the airsoft gun, the gear ratio, and the motor and battery responsible for pulling all that. On a conventional airsoft gun which is entirely mechanically driven, you can manipulate the rate of fire a few ways. The easiest way to increase rate of fire is to first upgrade your motor and battery. This is not going to require you to open up your mechbox and is where novices should look to first before tackling gearbox work. All airsoft guns are built and tested by their manufacturers to perform within a certain range based on the components they use. Changing things out without an understanding the cause and effect could negatively affect performance and longevity.

Q: How do I increase trigger response?
A: Improving trigger response is more of a byproduct of all your parts working in synergy and completing a cycle faster as well as responding quicker to your trigger inputs. Stock AEGs have a noticeable delay in trigger pull to the firing of a shot compared to a tuned AEG, though to the uninitiated, 10-50ms of delay is probably not functionally noticeable to a novice. Improving trigger response can be tackled numerous ways: increasing the mechanical cyclic rate of your AEG, improving its electrical/mechanical efficiency, or increasing the discharge from your electrical system to power the gearbox. All of these can get you to the desired results and there is some synergy of components involved so careful thought must be exercised as throwing a bunch of parts in might not net you the results you desire.

Q: What gear ratio do I need?
A: If you are replacing stock gears, the most common agreed upon ratio would be 18:1. Beyond that, if you are looking to change the gear ratio let it be known that a motor should be matched to it or else you will increase electrical draw by introducing a lot of electrical inefficiency, which is why most people should start by adding a motor with more torque. Most AEGs, even the expensive ones, have fairly good motors but a proven aftermarket one will always perform better. Faster gear ratios will come in 16:1, 14:1, 13:1, and so on. What's actually available is dependent on the manufacturer. Higher torque gears also exist for people that want to power a gun utilizing a much heavier spring rate

Q: How long do gears last?
A: Good quality gears last tens of thousands of rounds if shimmed correctly and the gun is not forced to fire when there is a compression jam. Replace them if the teeth break.