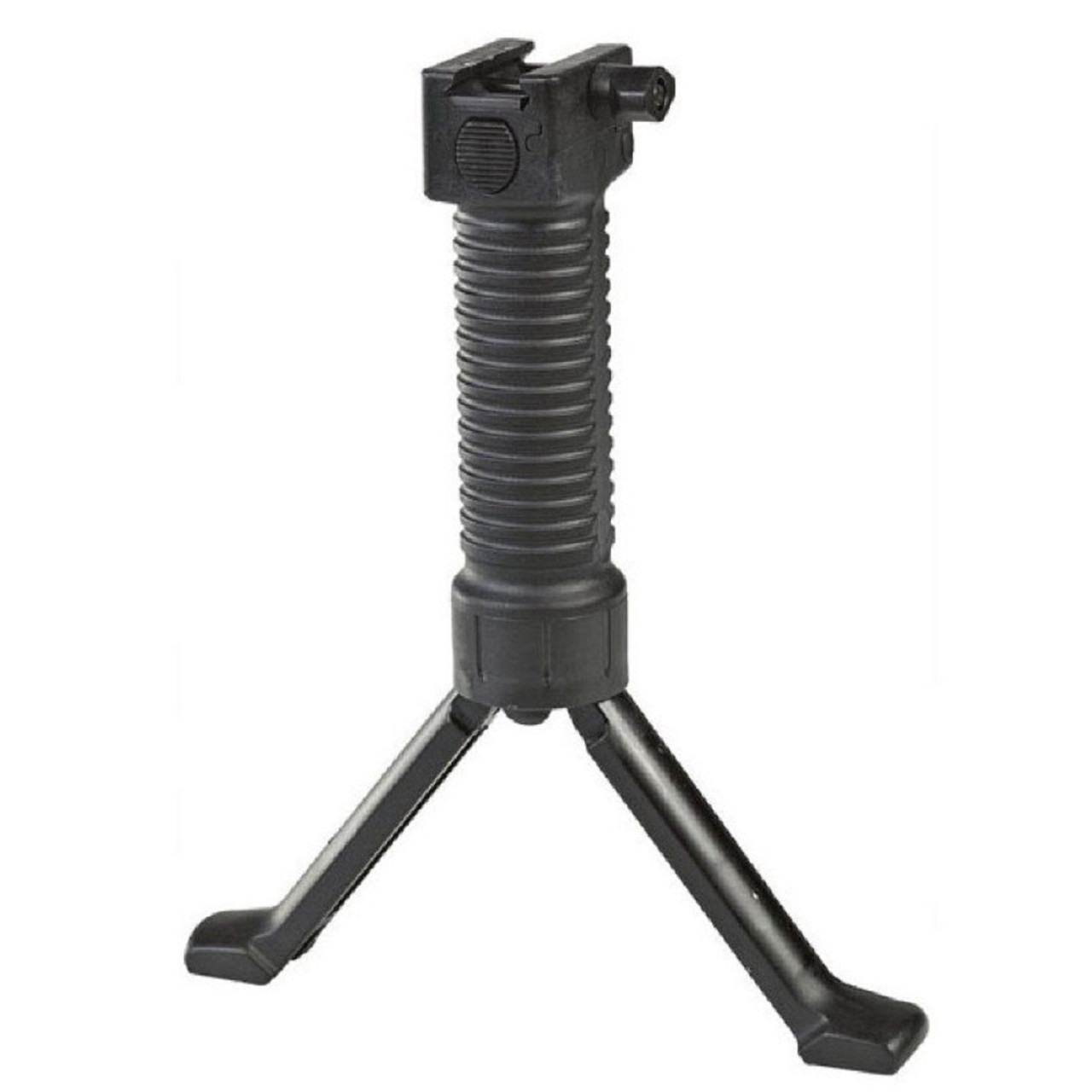 Check out our selection of attachments below! Click Here to Learn More About Attachments!.  Have questions?  Give us a call at 888-316-7816

What type of attachments are available for airsoft guns?

There are multiple types of attachments available for airsoft guns, we've included some of the popular ones for reference below.

Bipods are folding legs attached to your electric airsoft rifle that can provide a steady aiming platform. They can be stowed away when not in use or deployed on the fly to enhance your accuracy. Bipods can be mounted by one of two ways. Many airsoft sniper rifles (or hunting rifles) use a bipod stud which looks like a simple eyelet. Traditional bipods mount by hooking into the bipod stud and then clamping down. Another style is rail system mounted. Most military style arms will have rails or a RIS (rail interface system) which allows attaching of universal RIS mounted accessories.

Detachable grips/vertical grips/vert grips/tactical grips/etc are designed to attach to a gun and give your offhand a place to hold your rifle or SMG from. This gives you more positive control over certain situations or can help the shooter control recoil better (not an issue in airsoft so much). Certain grips also have added features sometimes such as storage compartments, pressure switch slots, retractable bipods, folding bodies, and so on.

Some grips are more basic and are just literally only grips. There are stubby grips as well which offer a minimalist approach to giving you a vertical grip without excess length which can add weight or can be more clumsy in some users eyes. Angled foregrips are designed to give you a something to grab on that is low profile but more properly lined up with the bones in your wrist giving you better comfort and control.

The front part of your long gun (excluding shotguns) is called the handguard. This is where you would hold your rifle with your off hand and its purpose is to keep you from touching the barrel as it functions as sort of a heatshield. Heat is not a problem in airsoft guns fortunately so this is just a part of the gun you hold. Handguards can be swapped out for other styles and shapes on the more popular guns. Many people change handguards over to forends with rail systems so they have more options for accessories. Take for example the classic M4 airsoft gun with a round handguard. With a gun like that you have numerous aftermarket options for handguards. You can change to a different looking one, one that has rails, and so on.

A popular thing people change over to are not for standard picatinny rail systems so much as Keymod or MLOK styles which can accommodate modular accessories and still keep the gun very streamlined. This is all user preference as the goal at the end of the day is to personalize your airsoft gun the way you want for the best function and comfort.

Do keep in mind that though there is a large aftermarket for Keymod or MLOK specific accessories, these are somewhat more proprietary than your standard Picatinny rail and add cost. One example is if you want to take a grip meant for picatinny rails and want to mount them to a Keymod handguard. You will have to add a picatinny to keymod rail section to make this happen. Or you could get a Keymod mounted grip and attach it directly to the Keymod compatible handguard. So you can see how this would add to your cost a little bit, though the latter solution would offer a more streamlined package. Again this isn't going to make or break your gun but a minor detail people often come across when customizing their gun to suit their needs.

Rail and mounting systems are very popular on rifles because they give you the ability to customize the gun to your mission. For years the only option available was the mil standard 1913 or picatinny rail system. These were great accessories that allowed a user to add multiple accessories including vertical foregrips, flashlights, lasers, peq boxes, scopes and many other items. The problem with this type of rail system was the weight and bulk that it added. Also, the rails had many sharp corners that made it easy to cut yourself on. In recent years many new technologies have been introduced. Keymod was one of the next steps and is still very popular. After keymod Magpul came out with their version called MLOK. The beauty of MLOK is that it gives you a smooth mounting surface without any sharp edges and reduces the weight of the rail / handguard drastically. This makes for a much more comfortable grip while making your rifle lighter. Use MLOK specific accessories to mount directly to the handguard and customize your rifle as you like.

If you are familiar with rail systems and picatinny rails in general, you'll notice a lot of weapons with rail systems tend to be bulky or carry a lot of unnecessary weight over their non-railed counterparts. A new standard for mounting accessories to firearms was devised by VLTOR Weapon Systems and Noveske Rifleworks to allow for a more streamlined feel and appearance while maintaining all functionality. This type of mounting became known as Keymod and was eventually released as open source for any accessory and firearm maker to follow the Keymod standard. The name comes from the key-shaped hole that is synonymous with Keymod mounting platform and the "mod" part meaning modular.

Making Keymod an open-source design propelled it quickly to become a popular style to use for firearms and firearm accessories. Though the picatinny rail is not going anywhere for a long time, Keymod simply gives you more options. Having Keymod specific accessories means you can directly mount them to your forend without the additional bulk associated with picatinny accessories. Accessories include flashlights, lasers, sights, scope mounts, vertical grips, rail panels, hand stops, pressure switches, and even additional picatinny rail segments to allow for attaching of legacy accessories.

The signature Keymod look is marked by the large diameter hole in the handguard with a narrow slot which of course looks like a literal hole for a key or something you'd find on a shelving system. Inside of the rail system the Keymod hole is cut further to allow more positive locking using the proprietary hardware on the accessory side. On the accessory side you have a bolt and distinctly threaded hardware with a chamfer designed to lock into the Keymod hole. It will usually have two bolts to mount to the forend and you would insert the accessory, slide forward into the locking position, and then tighten the screw/bolts. The screw is usually but not always captured onto the nut so there is no way you can lose the small parts. This design also is designed to resist backing out under recoil both forward and backward.

If you desire to make your airsoft gun more streamlined and ditch rails where you don't need it and save some weight, Keymod is probably the way to go. Though you will have to invest in some accessories or adapt your existing accessories to work with Keymod, the benefits are obvious. Many newer guns on the market are starting to come out with Keymod handguards from the factory. Also worth mentioning is M-LOK, a competing mounting system introduced by Magpul industries. Several accessory makers have begun to make accessories that are dual compatible with M-LOK and Keymod simply by swapping some hardware.

If you are a simple player or are not into gadgets and attachments this system is not for you. You do not absolutely need any attachments to play the game of airsoft but the customization aspect and enhancements is what draws many people to modify their airsoft guns.

The following brands have some rifles in their lineup with Keymod handguards from the factory: ICS, Elite Force, Umarex, Classic Army

Q: Is a bipod necessary for me to use my rifle?

A: No, this is an optional item. A bipod will assist you in steadying your aim when prone or using a piece of cover that you can plant the bipod onto.

Q: What types of guns benefit from bipods?