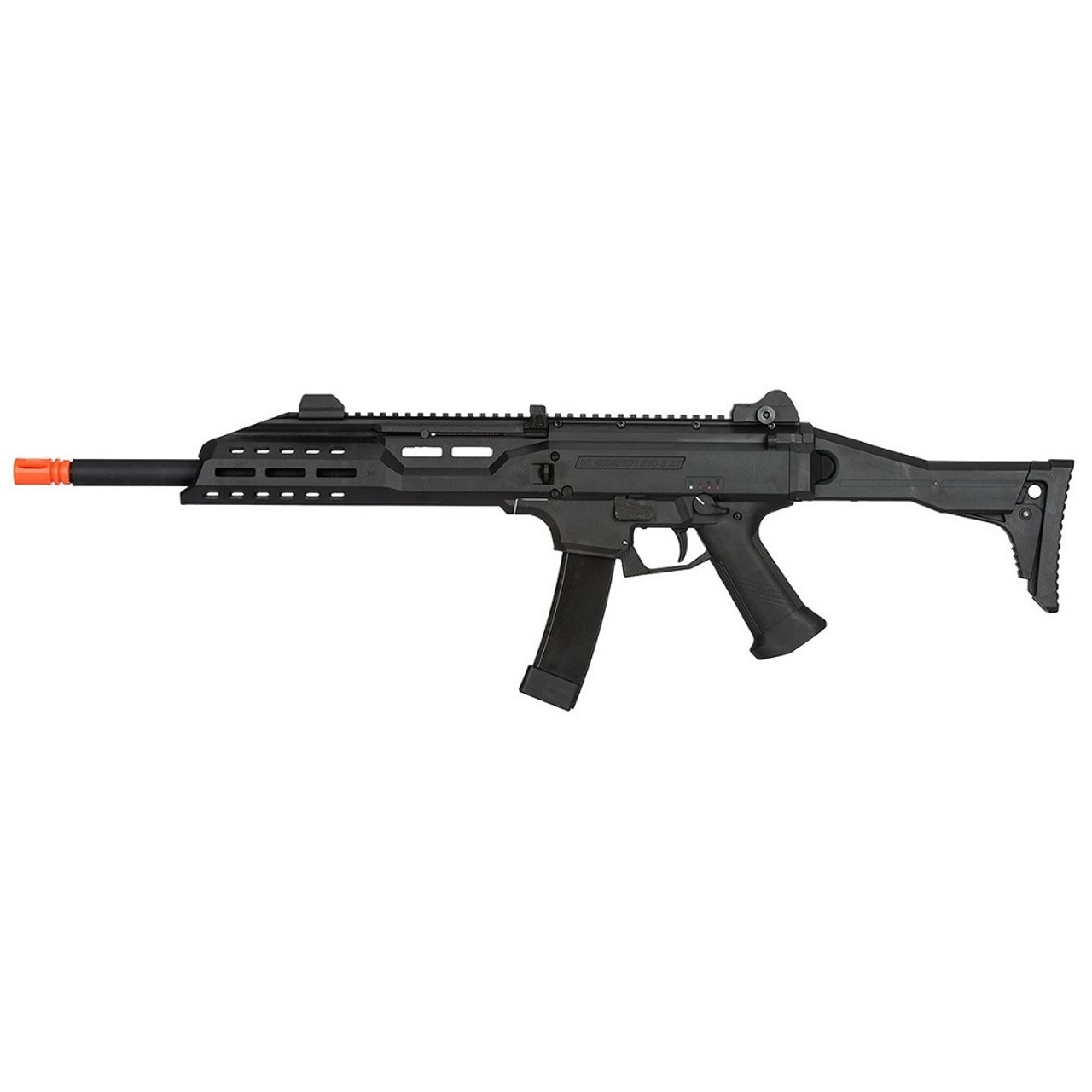 Check out our selection of Scorpion EVO AEGs below!  Click Here to Learn More About Scorpion EVO Airsoft Guns!.  Have questions?  Give us a call at 888-316-7816

What is the ASG Scorpion EVO?

The Scorpion EVO is a 9mm submachine gun that has been around for a few years and is made by CZ and made popular recently in video games and movies. This gun bears no relation to the vz.61 Skorpion. Its most distinguishing feature is its futuristic looks. With an entirely polymer chassis, this light and compact SMG is surprisingly intuitive and has a host of features built in. This gun is completely ambidextrous as well.

Action Sport Games (ASG)  in Denmark and works closely with CZ under license to bring us the Scorpion EVOs for airsoft. This lineup of guns is a radical design compared to many guns out in the market right now. It was designed from the ground up to replicate many features found on expensive high end guns such as PTWs and serves as the flagship model for ASG.

You’ve probably seen the CZ Scorpion in video games such as the various Call of Duty games and in the hands of elite police units. Stateside you can even own a real one in semi-auto configuration. These are 9mm submachineguns or pistols in real life.

The airsoft Scorpion from ASG has innovative features such as being completely ambidextrous, having an integrated MOSFET that provides single, 3-round, and full auto fire modes, empty magazine detection, low voltage detection, functional bolt catch and more.

We recommend the use of a 11.1v stick Lipo battery for the best performance. The 11.1v is a tight fit though we can help you with that if you have questions. The compact body of the Scorpions will not lend itself to fit any other type of battery. Due to the advance feature set and requirement of Lipo batteries to run, this gun is recommended for expert users only.

ASG offers five variants of the EVO for airsoft:

Note for the HPA version: HPA stands for high pressured air and is a new system in airsoft application that relies on the use of air tanks not too different from paintball. The gun is designed especially for this application and requires air and a small Lipo battery to run the electronics. Every function of this gun in the HPA version is the same as the AEG version. HPA works by activating a solenoid inside the gun with the pull of the trigger. The solenoid shoots a burst of air into the barrel to fire the gun and it draws the air from a hose connected to the gun. The tanks can vary in size depending on what you want to use but you will want to use an SLP (low pressure tank) for airsoft. The advantage to this system is the quick response time and lack of moving parts to break down or wear over time. Your biggest enemy in HPA will be leaks though performance stumbles in the lowest of temperatures. When running properly, HPA guns work well and are pretty simple when you look at them. The biggest barrier would be the higher cost of the gun/engine overall as well as the continuing cost to keep using it (tank refills).

Q: Which version of the EVO should I get?

A: This depends on personal preference.  The different lengths work well in different environments.  Also, the AEG versions are great for most players.  The HPA version requires you to have an HPA tank and a location to fill the tank at as well, so take this into consideration.

Q: Is this a good gun for a beginner?

A: The EVO is considered a high end airsoft gun.  With that, it is ok for a beginner to use.  Something to note is that the battery is a tighter fit than other airsoft guns and you'll need to take care when installing it into the the gun.