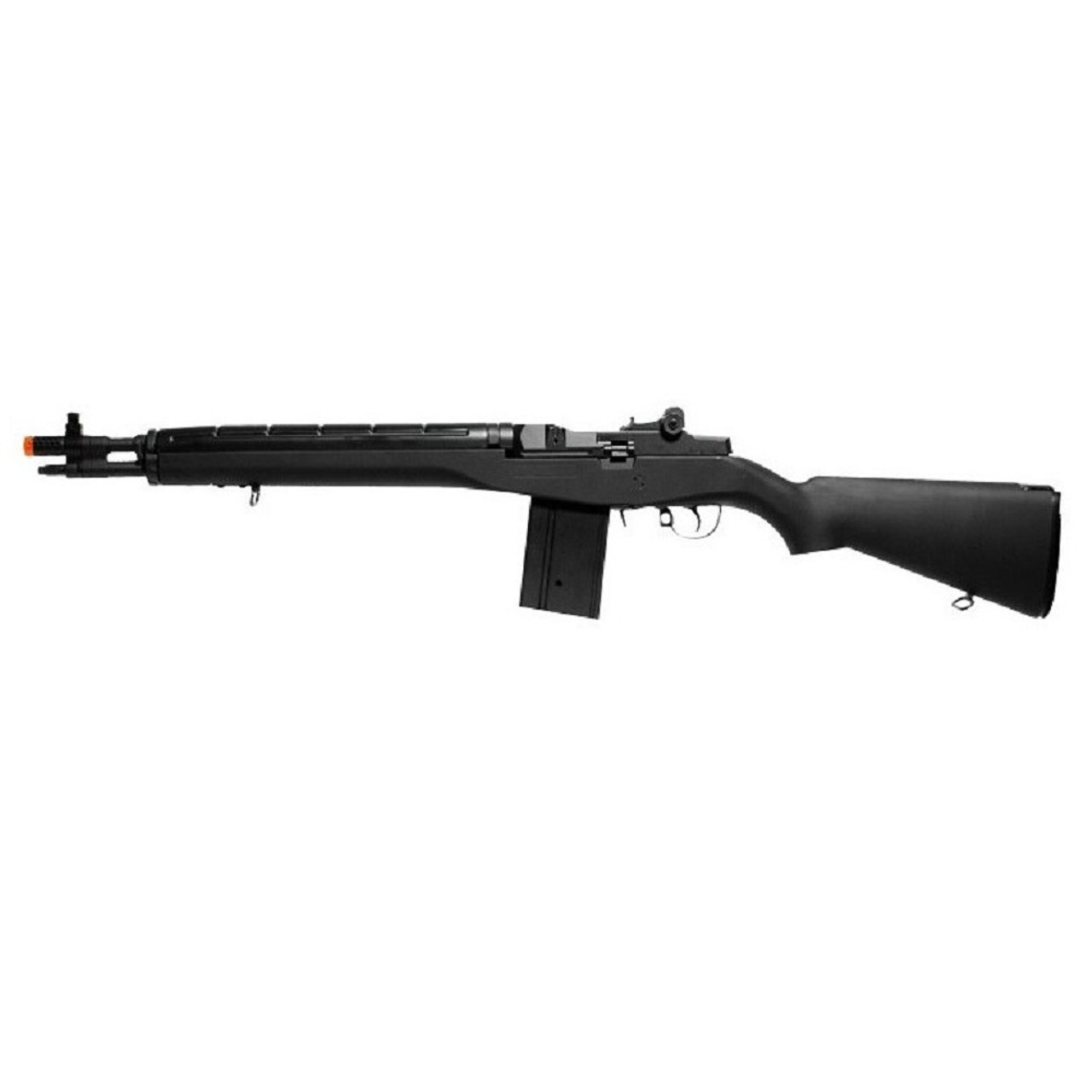 What is an M14 Airsoft Gun?

The M14 is a select fire US military battle rifle that replaced the M1 Garand and saw limited use in the Vietnam War when it was replaced later on by the M16 family of weapons as a standard issue rifle. The M14 however remained in service for quite some time later on for training as well as specialized marksmen and sniper roles.

The M14 is a big heavy rifle that fires the powerful 7.62mm NATO round and when the M16 came int to replace the M14 it was met with resistance and controversy. Many felt the M16 with its polymer furniture and futuristic design to be toy-like and the power to be lacking. The biggest factor though was probably reliability of these early examples. Nonetheless many diehards clung to their M14s as much as they could.

As they were phased out of frontline service, many of the remaining inventory of rifles were converted to the M21 sniper rifles for those requiring a semi-automatic rifle for the mission. Since then the M14 has seen use in conflicts as recent as Afghanistan and Iraq where greater lethality at range was required. These later on were modernized to have rail systems with the action being paired to a new chassis (known as the M14 EBR).

Technically speaking, the M14 is actually the second shortest lived stint as the American service rifle but it has also remained in service the longest. The M1 Garand was very advanced for its time in the 1930s but as time progressed, improvements were desired and sought. This lead to development of what became the M14. The military wanted to replace a number of weapons currently in service with the M14: The M1903 Springfield, M1917 Enfield, M1 Carbine, M3 Grease Gun, M1 Thompson, M1919 Browning, and the M1 Garand. The idea was to simplify the supply chain by using a common caliber for all issued weapons. This backfired miserably as it was impossible to replace all these weapons and the M14 did not do well in any particular role to justify it. The big round was not suited to be a submachinegun round. The rifle was too light to be a support weapon. The M14 did not have a good initial reception, but it was put into service anyway into the early phases of the Vietnam War.

The round was powerful and liked for its ability to penetrate cover, and the rifle overall was quite reliable. But the long rifle was a clumsy weapon in the bushes and the atmosphere caused issues like swelling in the wood stock which adversely affected accuracy. Later retrofits to solve this would be a synthetic stock but the rifle was pulled from standard issue service before this could be implemented. As mentioned the gun is too light to serve as a support weapon. The round was too powerful to be controllable in full auto mode so most opted to not use this feature at all, and later on most retrofits had this feature removed and disabled completely.

For airsoft, the M14's look and feel are captured perfectly no matter what era of M14 you are looking at. All the M14s we offer use a Version 7 gearbox for reference.

A: The M14 is a great historical rifle.  The longer length makes it great for building a DMR

Q: What type of magazines does the M14 take?

A: The M14 takes its own type of magazines.  There are different variants of the M14 on the market, and some variants take different magazines from others.  If you have questions, give us a call or send an email and we'll be happy to help you find what you need!