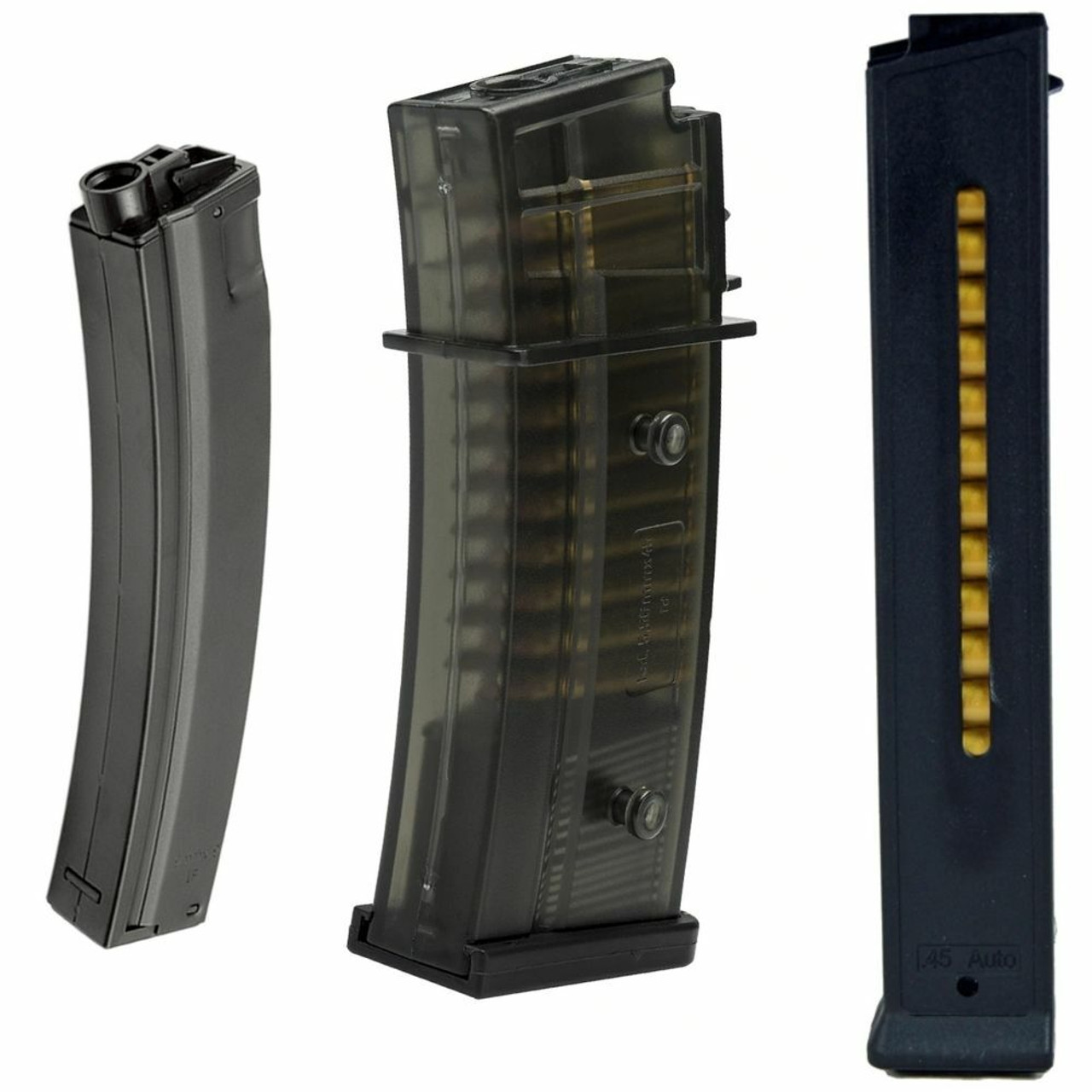 About the different types of Heckler & Koch Airsoft magazines

Currently we offer Elite Force magazines for the G36, UMP-45, and the MP5! These are compatible with the Elite Force sport line and pro line AEG's, and are available in the high capacity and mid capacity variants.

Q: Should I use a high capacity or a mid capacity magazine?

A: The high capacity magazines in this category hold around 350 to 400 rounds depending on the model. These are ideal for newer players, or anybody who wants to carry less magazines. They use a wheel located on the bottom of the magazine to wind up tension on a spring, loading the bb’s into the gun. You’ll need to wind the wheel about 20 times for the best results, then you’ll need to do that about 2-3 times per magazine to get through the entire reservoir.

Mid capacity magazines are good for players who don’t mind carrying more magazines and reloading more often, and who want to ditch the winding process. Mid capacity magazines hold about 90 to 120 rounds depending on the model. They have a spring that runs through the body of the whole magazine, and can feed the entire capacity without stopping. These do require a speed loader to load the magazine effectively.

A: Heckler and Koch is a German defense manufacturing company known for manufacturing rifles, pistols, sub-machine guns, and grenade launchers. Their products consist of the MP5, UMP sub machine guns, the G3, HK417 battle rifles, G36, HK416 assault rifles, the MG5, HK21 General-purpose machine guns, the MP7 personal defense weapon, the USP series of handguns, the PSG1 sniper rifle, and more. All HK firearms are named by a prefix and the official designation, with suffixes used for variants.

HK has a long history of innovation in firearms, such as the use of polymers in weapon designs and the use of an integral rail for flashlights on handguns. HK also developed modern polygonal rifling, noted for its high accuracy, increased muzzle velocity and barrel life. HK was established in 1948. In 1956, the German army found themselves in need of a new infantry rifle. HK developed the G3, and won the army contract. In 1969, HK launched the MP5 sub machine gun. In 1974, Heckler & Koch diversified into two more areas, HK Defense and Law Enforcement Technology and HK Hunting and Sports Firearms. Since then, HK has designed and manufactured more than 100 different types of firearms and devices for the world's military and law enforcement organizations as well as sports shooters and hunters.

In 1995, the German government awarded HK the contract for creating an updated standard infantry rifle, and a new standard issue sidearm. HK created the G36 and the USP models for this purpose. In the 1990’s HK was commissioned to create a new variant of the M4. HK produced their own M4 style carbine that became known as the HK416. Some special operations units have adopted the HK416, but it did not become standard. The Marines occasionally use the IAR and M27 variants.