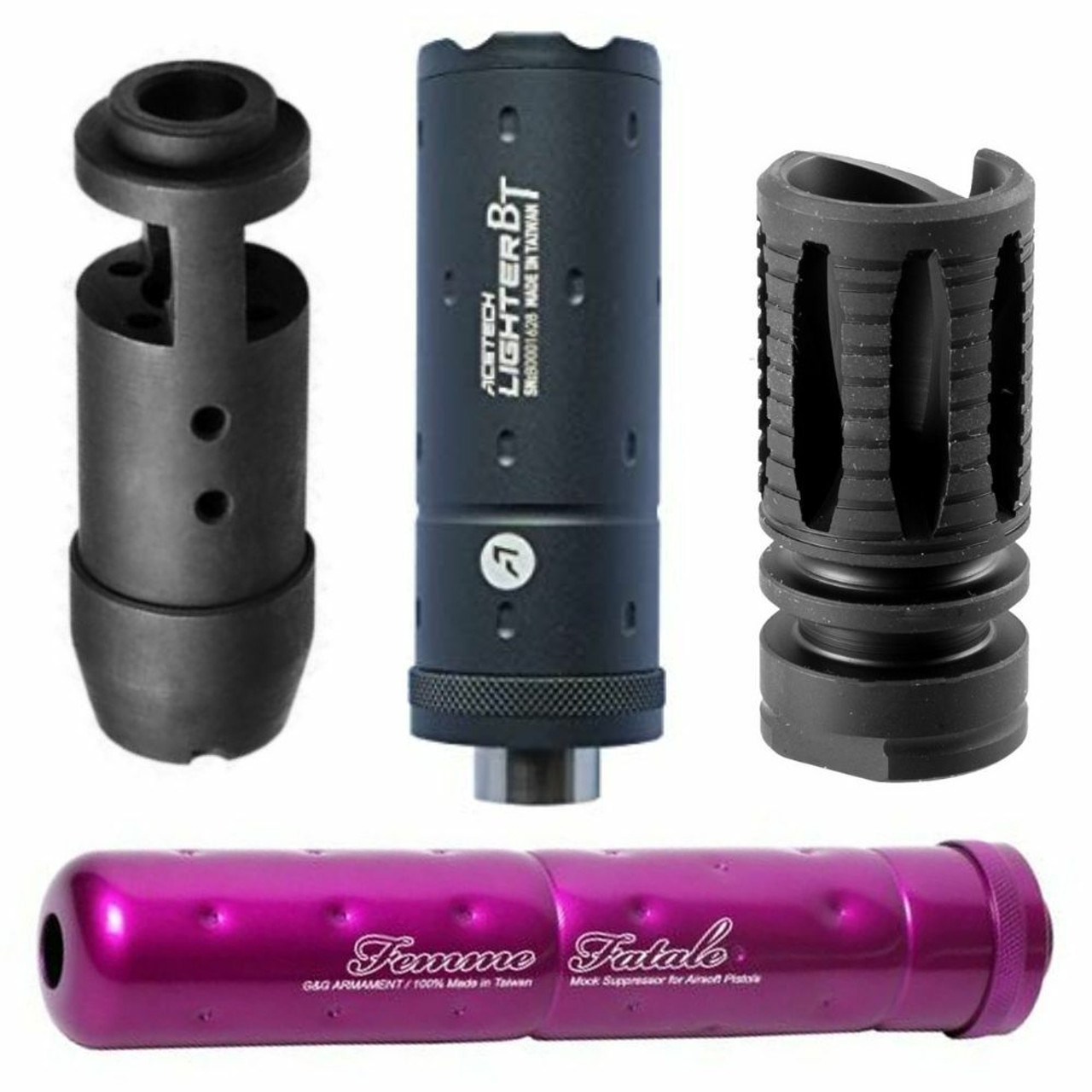 Check out our selection of muzzle devices below!  Click Here to Learn More About Airsoft Muzzle Devices!.  Have questions?  Give us a call at 888-316-7816

What are airsoft muzzle devices?

Airsoft suppressors can mount in different ways so it will depend on the model you pick and the host airsoft gun for compatibility. Screw on types will be in the common -14mm (CCW) thread though occasionally you will find +14mm (CW) thread guns and airsoft accessories as well. Research your gun carefully to determine the thread on the barrel before purchasing a mock airsoft suppressor.  Threaded type mock suppressors may work not just on rifles but may also be compatible with some airsoft pistols to give you a very cool look.

Some types of mock suppressors will utilize a QD (quick detach) method of mounting which will allow you to quickly attach or detach the airsoft suppressor on the tip of your gun rather than a thread on application. These will often utilize a specific type of flash hider which are sometimes included. This depends entirely on the design so please read the description entirely to determine if a certain model is right for you.

Do keep in mind that adding excessive weight to the end of your gun could ruin the balance or make your electric airsoft rifle more unpleasant to run around with in a game. Mock suppressors can be made with plastic or metal so you have quite a few options there. Mock suppressors also obviously add length to your rifle too so take that into consideration. Guns that are short have the advantage behind cover especially in CQB because you can get close behind your cover and have your rifle up to shoot faster. To aim and peak with a long gun you have to stand off from your cover quite a bit which exposes you more at certain angles.

So do you need a mock suppressor? No you do not. Do you want one? Probably! Because they look so cool! Again there is no functional benefit other than style. Which model is right for you? The one that fits! The style is entirely subjective so choose the one that appeals to you the most and can actually work on your airsoft gun. Other than that there's nothing more to it. If you are looking to extend your inner barrel into the mock suppressor you will have to measure carefully what length inner barrel to pair it with or buy a longer barrel and then have it cut and crowned. While this is great for gaining a couple FPS and having your short gun match the performance of a longer gun, you must be careful not to smash your barrel/mock suppressor into objects otherwise you could tweak your exposed inner barrel.

A: No.  These accessories are cosmetic in nature and perform no sound suppression.  They are a great way to install a longer inner barrel to increase your range and accuracy.

Q: How does a flash hider reduce the flash?

A: A flash hider in airsoft is strictly for cosmetic purposes

Q: What is a tracer unit?

A: A tracer unit is designed to illuminate special airsoft ammunition so that it can be seen at night.  Most airsoft tracer units come in the form of a mock suppressor or barrel extension to give the gun a great look as well.  In addition to illuminating the ammunition, it also delivers a muzzle flash which is a very cool effect when playing a night game.