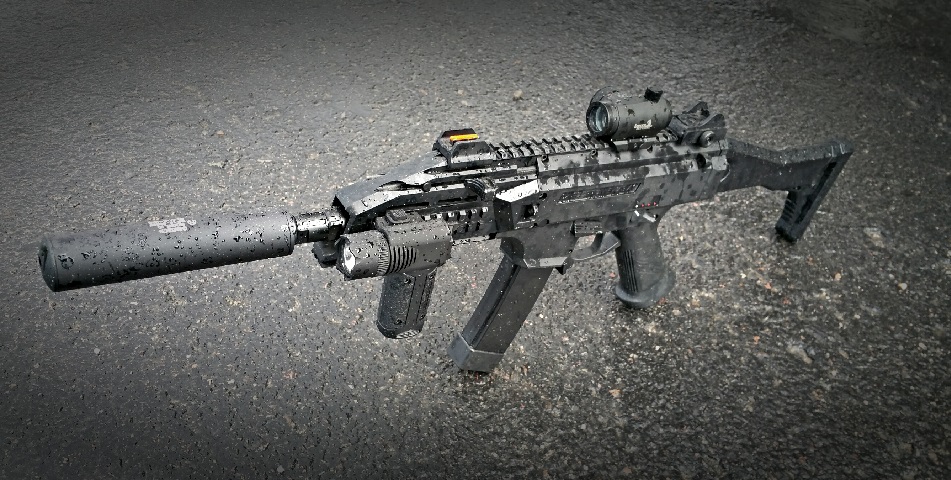 In this Airsoft Spotlight we are going to take an in-depth look at the Action Sport Games (ASG) Česká Zbrojovka (CZ) Scorpion Evo 3 A1 Airsoft Gun.  We will also go over briefly about the history of ASG, CZ, and the lineage behind the CZ Scorpion.  ActionSportGames is one of the top names in the business of replica firearms and accessories manufac-turing including Airsoft guns, Airguns, Co2 guns and replica firearms. They specialize in 1:1 scale replica guns and accessories which are licensed by numerous real firearm companies. ASG was founded in April 2003 as a merger of the two largest Danish distributors of Airsoft Guns and accessories, Pedersen & Grobelnik A/S (founded 1992) and Vestergaard ApS (founded 1960) and they are currently based out of Humlebæk, Denmark.  Česká Zbrojovka (CZ) is an old company and was established in 1936 out of a small town called Strakonice in the Czech Republic. Besides their pistols which are extremely popular and well known, one of their more notable military weapons was the Škorpion vz. 61 which is what the new Scorpion Evo 3 A1 is loosely related to. 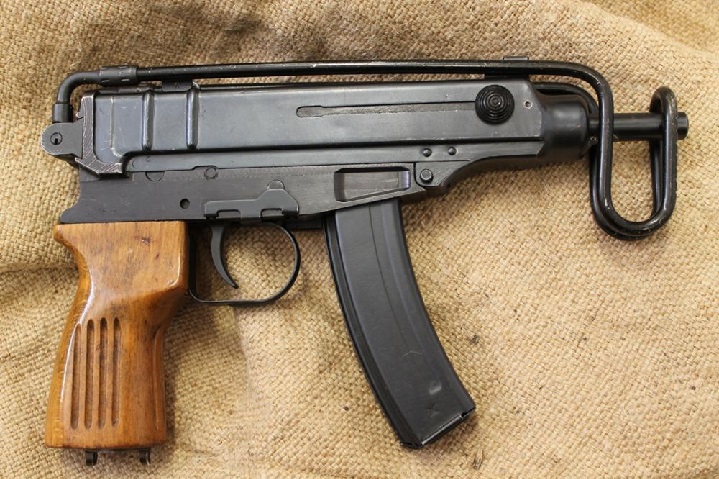 Above is a Škorpion variant, the Vz. 61 is chambered in 7.25x17mm (.32 ACP) there are other variants with different model numbers chambered in calibers like 9x17 (.380 Auto), 9x18 Makarov and 9x19mm (9mm Luger).  The gun is  straight blowback (versus delayed blowback) and fires from a closed bolt.  It is an awesome submachine gun. It is very iconic and has been seen in the news as well as numerous movies. 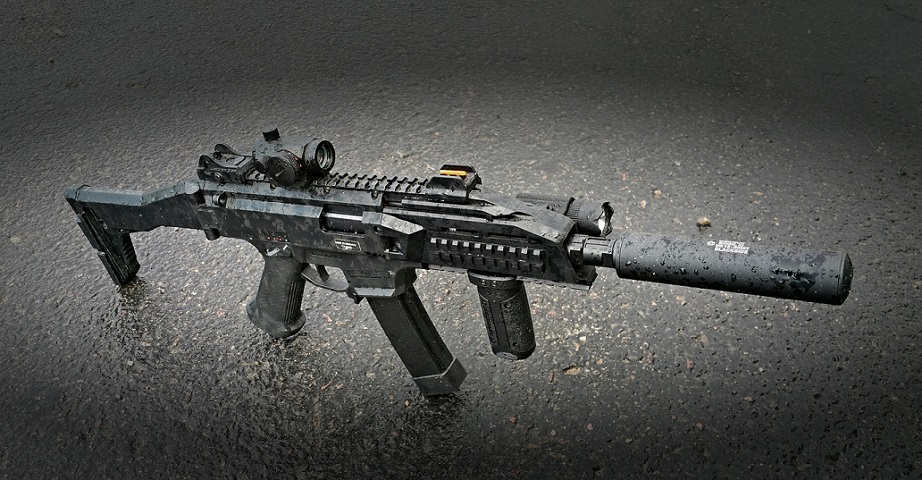 ASG has managed to produce a faithful replica of the real CZ Scorpion Evo.  The material they use to construct the body is the same as the actual Scorpion Evo and is made of a nylon fiber reinforced polymer and is identical in all dimensions and very close in weight.  The amount of technological advances into this gun are almost never ending.  This is pushing the envelope for quality and technology of an Airsoft Gun. 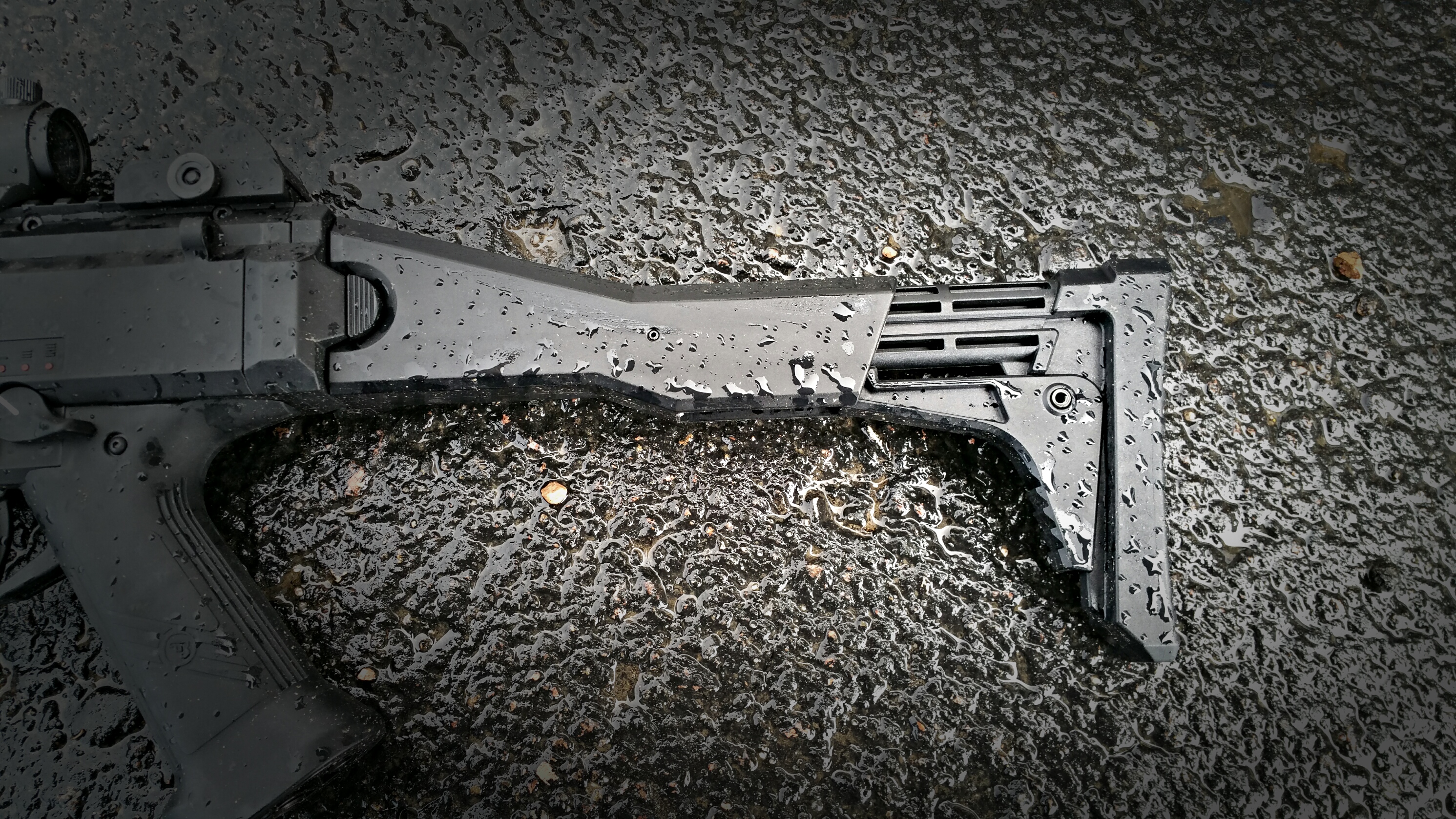 The gun features a 3 position stock that is fully adjustable for length of pull (LOP).  Speaking of LOP, the gun has a 12" LOP with the stock fully collapsed. With the stock in the fully extended position the LOP is 14.06". This range should fit almost every shooter with and without bulky tactical vests on. 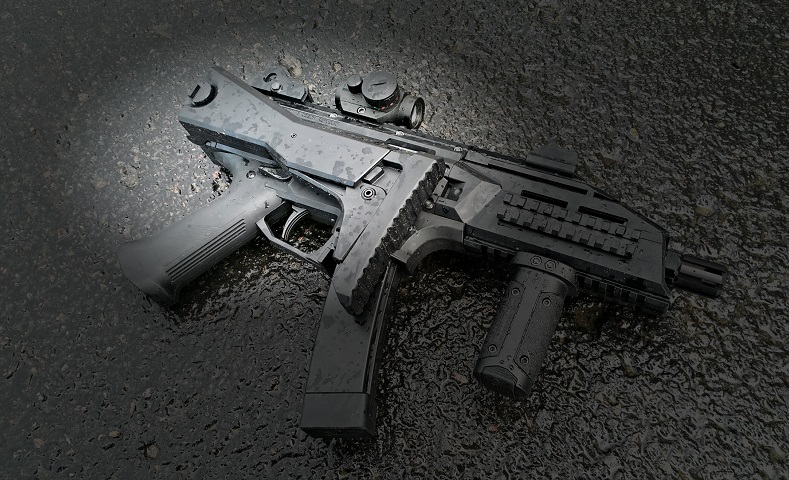 The stock is also side folding and is quite possibly one of the strongest folding stocks that I have ever seen on an Airsoft Gun. The stock latch and mounting hardware is super burly, this probably has something to due with it being made like the real stock that comes on the real Scorpion Evo.  With the stock folded it makes for a super compact Personal Defense Weapon (PDW). While folded the gun measures a MERE 17" Overall Length (OAL)!  With the stock deployed and collapsed, the OAL is 24.75".  I also figured if we were going for compact size I should take the suppressor off.  I replaced it with the ASG Metal Muzzle Brake. 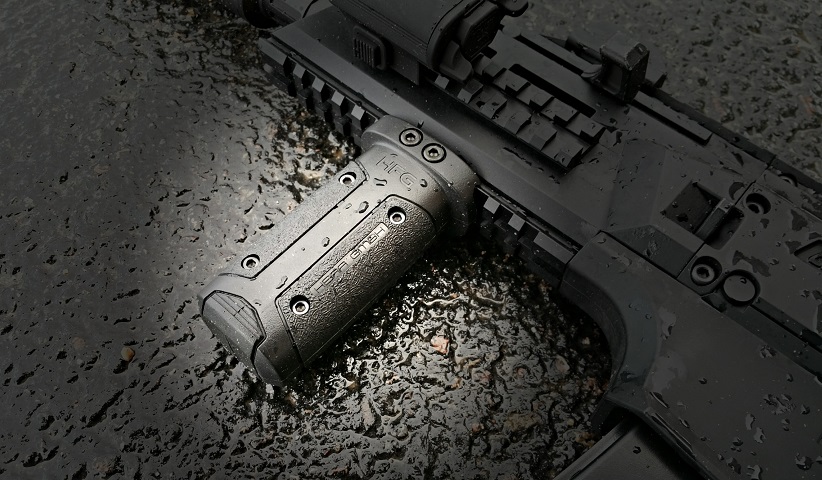 I choose to run a HERA Arms HFG on this gun as I felt the styling of it matches the lines of the Scorpion Evo beautifully.  The gun also fits extremely secure on the rail and also features a storage compartment in the bottom of the grip.  They are also extremely affordable. 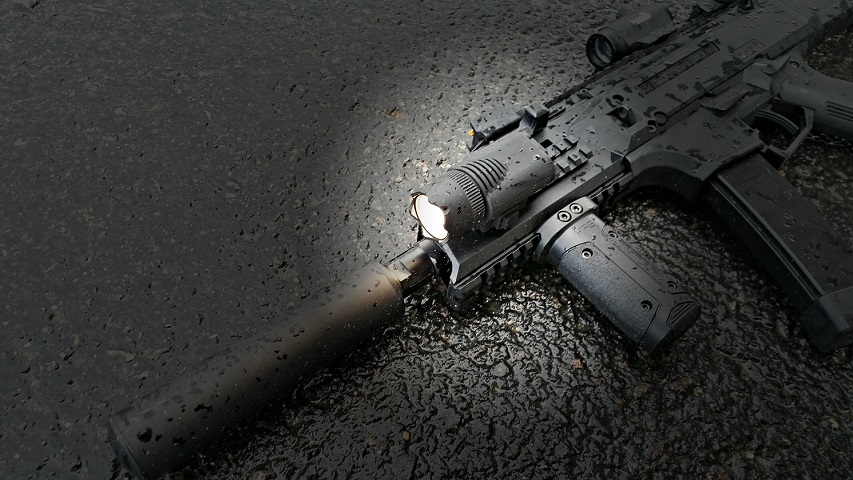 I chose to use the ASG Super Xenon Weaponlight for this gun due to its compact size and bright output.  The light uses two CR123A batteries and the paddle design of the on and off switch is very intuitive when using the HERA Arms grip.

I opted to use the suppressor for the majority of the time and used the ASG Threaded Suppressor Adapter.  This converts from the guns 18mm threads to standard 14mm Counter Clock Wise (CCW) threads.  I attached the MadBull Licensed Gemtech Blackside.  The reason for this was so I could cover the longer inner barrel I opted to install.

The gun, much to our surprise, actually came with a 208mm 6.03mm polished brass tightbore barrel.  However, we love to tinker with stuff and cant leave good enough alone.  We opted to install a extended Fox Custom 363mm 6.02mm Stainless Steel tightbore barrel which is a huge increase in barrel length for better accuracy and velocity. A 363mm long barrel would be about the most I would use with the stock cylinder volume considering it is ported. 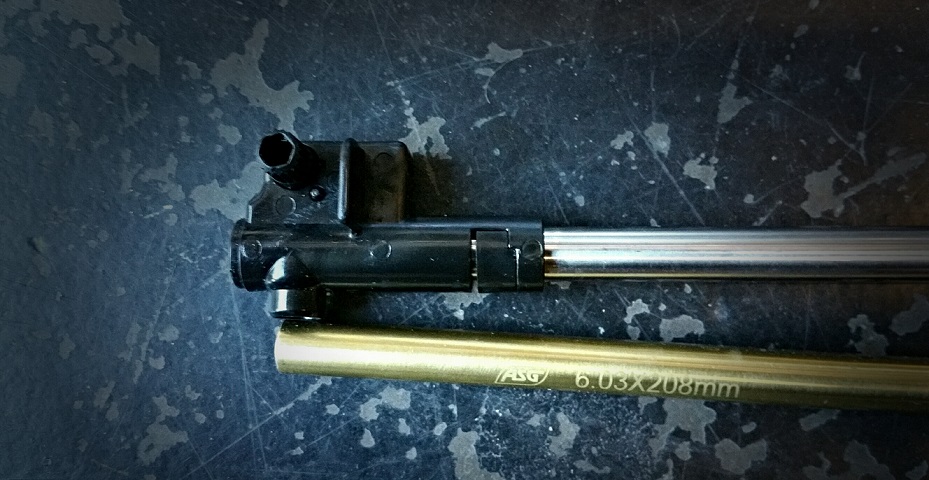 The hop-up unit is a very nice design.  The adjustment for the hop up is very positive and has satisfying clicks and will not move unintentionally.  The polymer used feels extremely beefy and isnt soft and easily deformed from inserting magazines.   If you notice the shorter feed tube, this is made to work in combination with its magazines and feeds every round in the magazine.  It is nice that you will not waste the last 4 to 5 rounds typical in M4 variants, especially when your magazines are 75 rounds.  You can also see the 6.03mm brass factory tightbore barrel.

The sight I prefer for this gun is the Lancer Tactical Mini Red Dot sight.  I chose this sight due to its low profile, lightweight, and integrated mounting base.  It is also the proper height for a lower 1/3 co-witness sight picture. This means that when you aim through the iron sights (properly sighted in irons and optic) the red dot will appear to be aligned with the irons and sitting on the front sight post. 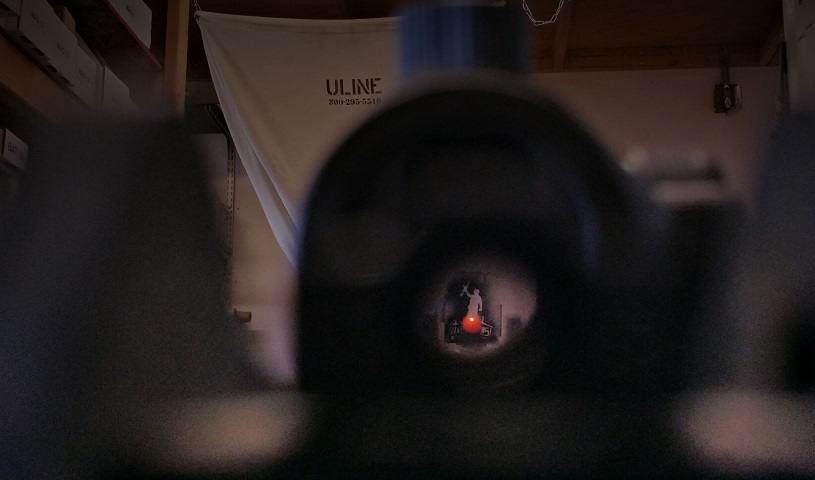 This is a lower 1/3 co-witness and is my preferred sight picture for M4 variants as well as any that I can achieve this on.  It allows to iron sights to be deployed all the time and not block the sights dot. 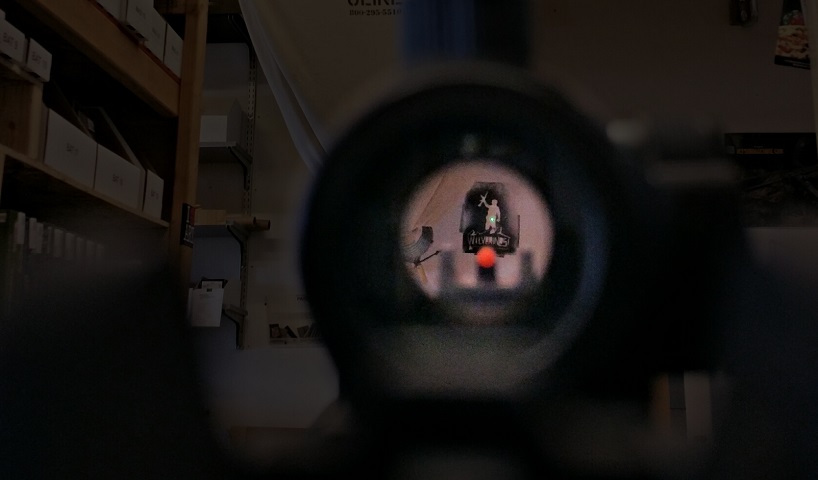 The picture above is the typical sight picture you would see and use with the sight still mounted on the same lower 1/3 co-witness setup.  This still allows a unobstructed view of the sights dot.  The nice thing about electronic dot sights is that the dot can be anywhere in the window and you should still be able to hit the target.  However with all red dot sights there is parallax and can cause aiming error at close distances when the dot is not centered int he electronic dot sight, however this is usually negligible and is approximately 2" with lower end electronic dot sights. The further the distance the less parallax there is and most sights that claim they are parallax free are only so at on average 50 yards+.  Enough gibberish, lets look at the guts of this thing. 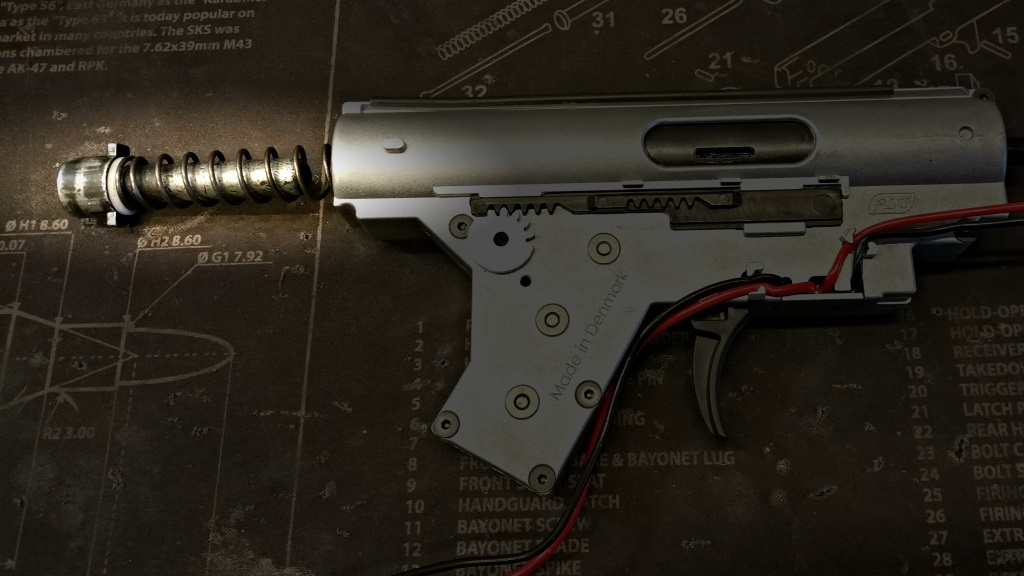 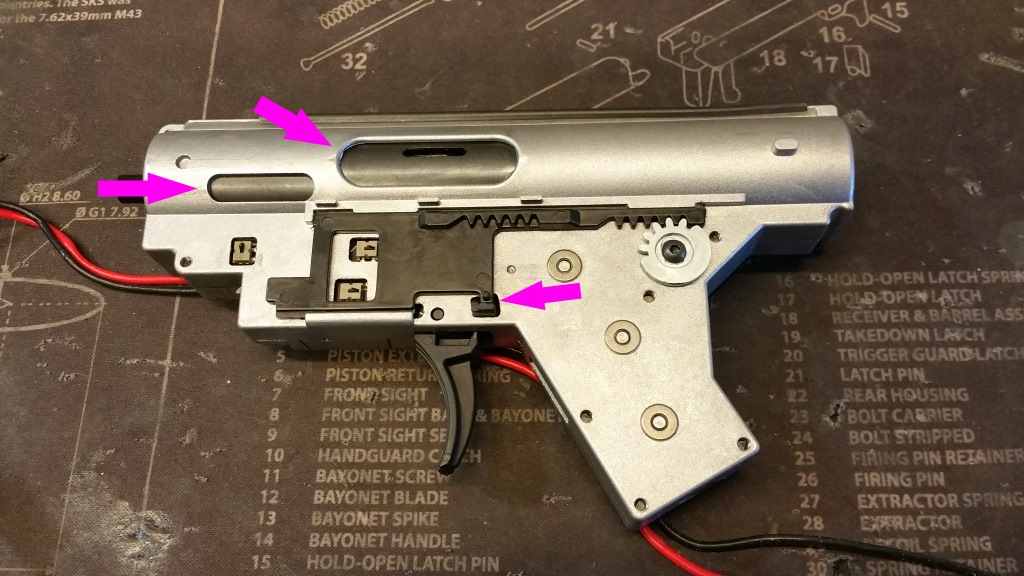 This gearbox cannot crack in the front like a standard version 2 gearbox shell. This is a totaly ingenius approach to keeping the gearbox front from breaking off.  On a typical gearbox shell the cylinder would fit into a window cutout into the gearbox shell which has 90 degree angles.  As some of you may be aware that 90 degree angles have a lot of stress where the two angles meet and from the constant pounding of the piston a stress fracture can develop and ultimately break the entire front section off.  To combat this some people add a small radius to any 90 degree angle reducing the stress in that are substantially. ASG has taken this about 1000000 steps further and the cylidner is fully encased into the shell and there are no 90 degree ports cut in the shell.  Also notice the safety is on the selector plate and keeps the trigger from moving back. This eliminated the standard safety latch in a gearbox further reducing the unnecessary stuff inside. 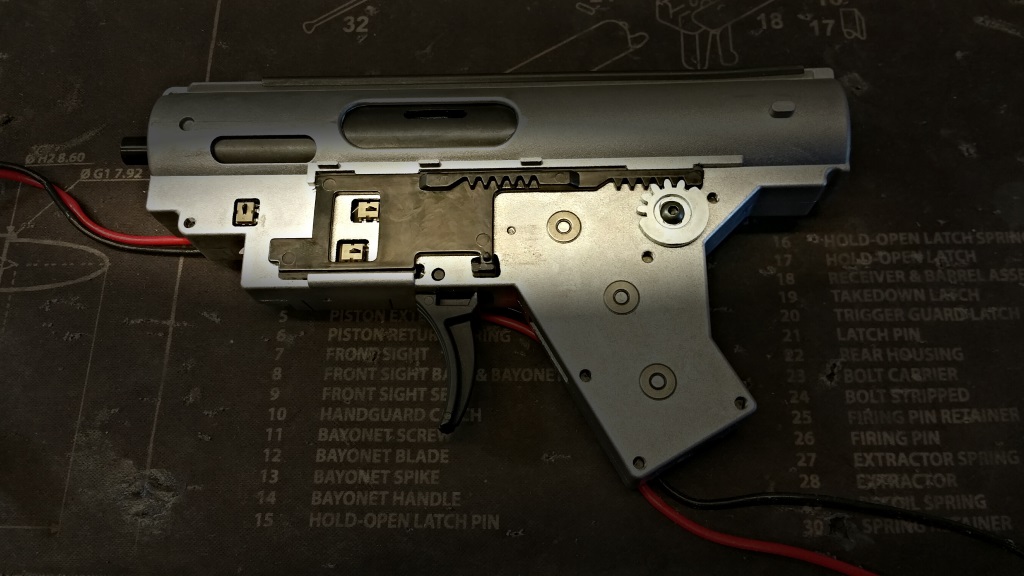 The selector plate is a completely different design and instead of actuating a cut off lever there are a series of micro switches which control the ASCU Electronic trigger system. 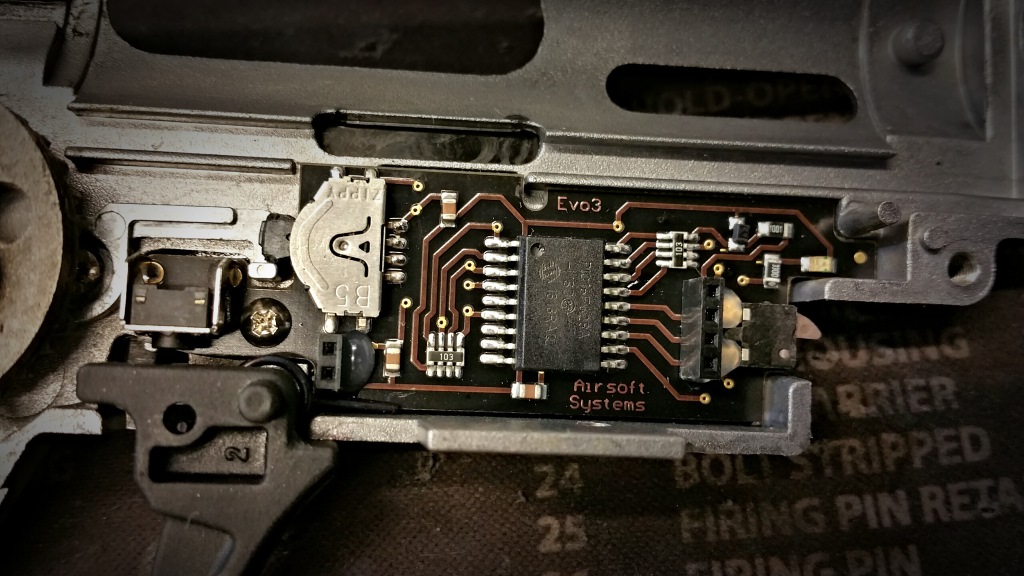 Inside ASG uses an Airsoft Systems ASCU designed specifically for the Scorpion Evo. This is a fully electronic trigger and mosfet. The trigger travel and response is unmatched. The gun has a electronic semi and 3 round burst. There are no cut off levers or mechanical devices to wear out. ASCU MOSFET Trigger System is available for standard version 2 gearboxes to retrofit.

The gearset is really nice quality and ride in steel bushings. They are arranged in a nice inline configuration. 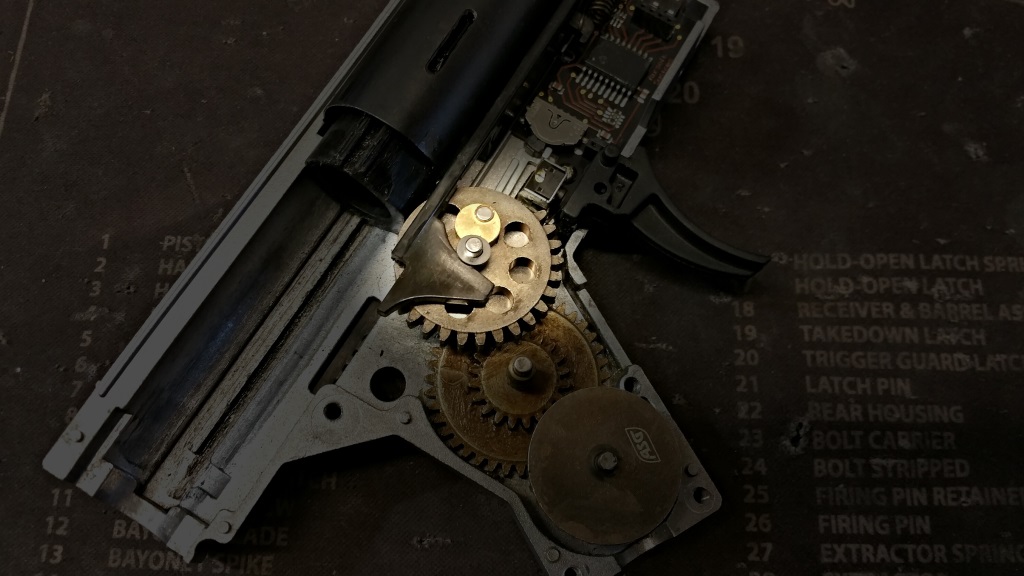 The sector gear has a nice and big sector gear clip.  Sector gear clips help insure reliable feeding by delaying the loading cycle of the tappet plate.  They keep the tappet plate open a little bit longer to allow more time for the BB to pop up and into position for the nozzle to take it home. It doesn't have any negative side affects relating to velocity as it is closed well before the piston is released. 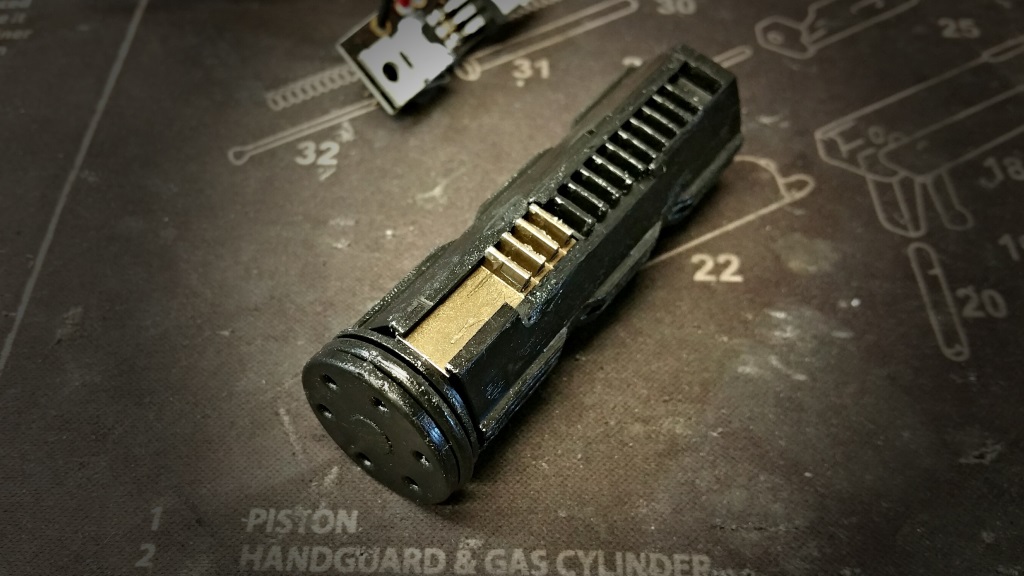 The piston is comparable to an aftermarket upgraded piston. The teeth are boxed in and fully supported on the sides compared to a standard piston where the teeth are only attached at the base. The 2nd tooth is removed for better engagement with the sector gear. The piston features 4 metal teeth and I think this is ideal, to have half metal teeth, since it is lighter and acts as a built in fuse for the system.  Typically on a all metal tooth piston setup it is possible to destroy everything, the gears and the piston, should one of the piston teeth breaks off or just wears out. The half metal tooth varieties have extra strength where its needed, when the piston is pulled fully to the rear and under a big load.  It also features a ported piston head, which should really be the standard. As the piston goes forward the air enters the ports on the face and expand the o-ring even tighter tot he cylinder increase the seal.  When the piston is being retracted for the next shot there is no unnecessary drag or vacuum.

Overall the Action Sport Games CZ Scorpion Evo is fairly priced and actually is a awesome value for all the stuff you get in this gun.  Below is a typical break down to get a gun to a comparable level.

$585 to $685 Dollars in total depending on the gun. A gun that still won't feed every last round in the magazine or stop firing when you are out of ammo and not dry fire or have a virtually indestructible gearbox shell.

I cannot stress enough how affordable and how much of a value this gun is at under $400 dollars.