This is the new Mk13 series from ASG and Archwick. It comes in two lengths, the short version is known as the Mk13 Mod 5 and the long version is the Mk13 Mod 7. The Mod 5 has two color combos. The real rifle is based on a Remington 700 long action and an Accuracy International Chassis. The airsoft version is manufactured by a company named Archwick and is brought to us in the US by Action Sport Games with full Accuracy International licensing. This is a spring powered sniper rifle and it is designed to be a high end sniper rifle option. The Mk13 Mod 7 is in general use with the USMC replacing the M40 rifles, and the shorter Mod 5 is in use with MARSOC if you want to do a modern impression kit around a sniper rifle. 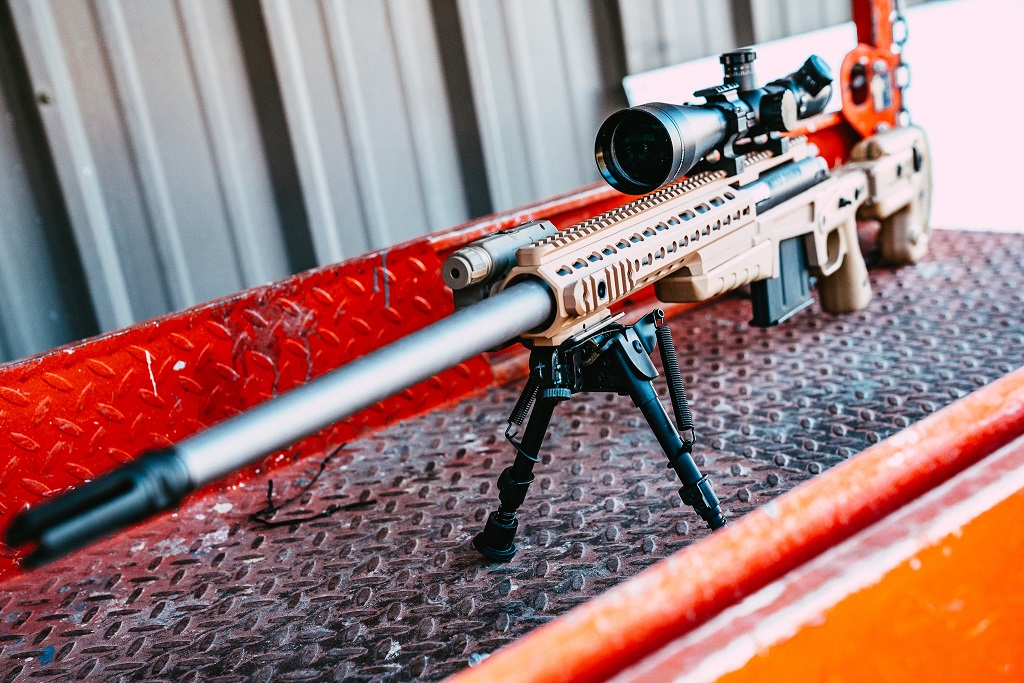 First of all, when you pick this up initially, you will feel that it is quite hefty. It is heavy but solid throughout, feeling like a real rifle. Most sniper rifles, even high end versions that cost in the 500 dollar range feel toy-like on the outside. This is even more true of the entry level guns. The chassis is solid and there are no creeks or wobbles.

Starting from the muzzle end, you have a 14mm CCW thread complete with a metal flash hider. The orange tip is affixed by default so professional removal is required if you want to use this flash hider. The flash hider is a 4-prong type like what is on the military rifle.

The barrel is all metal with a matte stainless style finish and is solid throughout. It gets fatter as you go back to resemble a bull barrel.

The handguard is metal and is a keymod system. The 12 o'clock rail is picatinny and these keymod rail sections have picatinny with steel QD sockets. 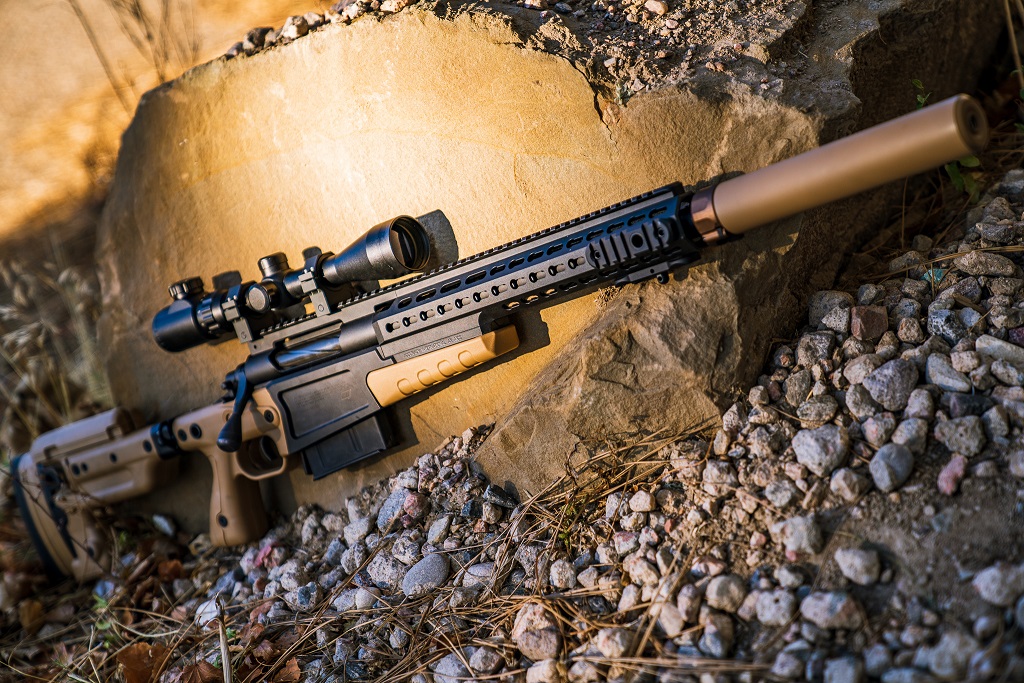 The receiver is metal and features trademarks and even a QR sticker that resembles what is on a military rifle. It has a detachable fake magazine that is hollow. This faux magazine uses a paddle release. Speaking of the magazine, the real magazine like all spring sniper rifles, sits forward due to where the inner barrel starts. It is cleverly hidden in a compartment in the handguard here and is held on by a detent. To access this, press the circular button and slide the handguard off. Pull the magazine out and lock in a new one.

This rifle has a wide pistol grip which is very comfortable. The trigger guard is wide for gloved use, and the trigger pull is very pleasant out of the box. You do not have to fight it to fire the gun, which can be the tendency on gritty triggers.

The bolt is a right handed metal bolt with spiral flutes on the bold body itself. The safety is located up top and has a positive feel when you engage or disengage it. 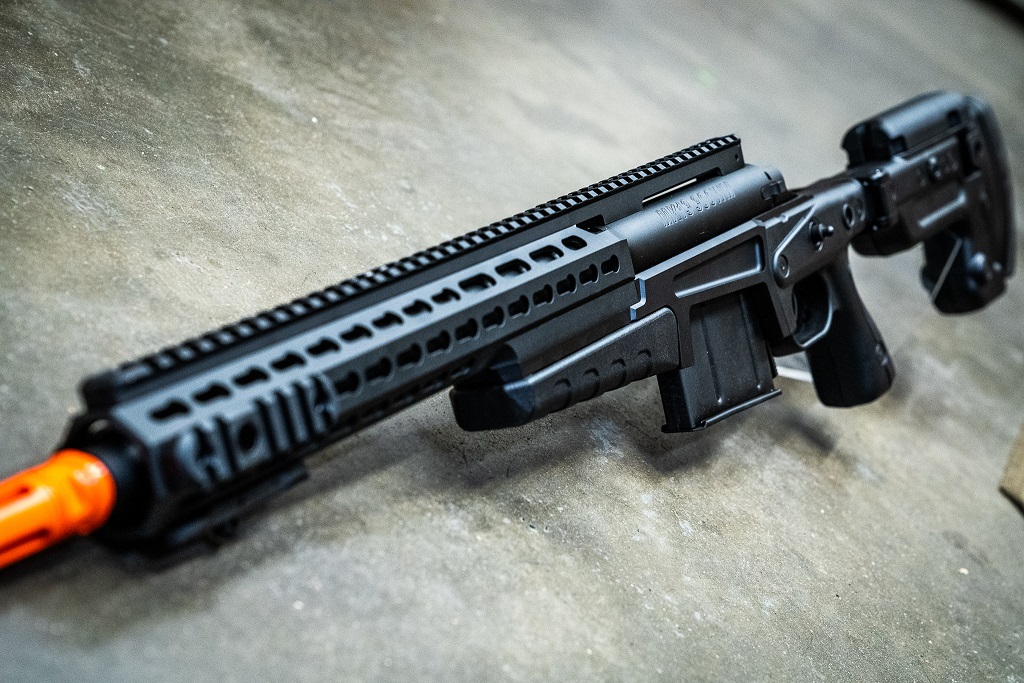 I have found all major components to be steel so it should be one of the most durable rifles out there.

The stock is a folding stock that locks solidly into place. The cheek riser is adjustable. The buttpad is rubber and it can be shortened. There is also a steel QD socket on either side.

According to ASG and Archwick, this is pretty much Marui VSR-10 system compatible opening up a lot of options if you need to upgrade. But here’s the thing: you don’t. The parts inside are the highest quality you will find and they are available out of the box. The critical components are steel. The only thing you might want to change is a spring rate of your preference. The piston assembly is slightly different from a VSR10 and is a different length, allowing a little bit more air volume than is possible with a standard VSR10. This means higher FPS potential overall if you choose to explore it.

If you want, you can even go to a normal VSR10 spec piston head no problem. But again, why would you?

The trigger box is all high quality parts and features a 90 degree sear, a must for all high powered spring sniper rifles.

The inner barrel and bucking are VSR compatible. To adjust hopup, you have two locations you can access it: from the 12 o clock with a small flathead, or through the true magazine well with an allen key. The gun comes with all the tools you need to tighten everything down except for one size allen.

This gun shoots about 2 joules out of the box which is conservative but it is capable of more. It is very accurate though I wouldn’t mind a tight bore barrel in it to make things better. The bolt pull is easy and feels smooth as well, no grittyness or roughness like a cheaper gun. The trigger pull is clean and also smooth like a VSR-10 with an expensive zero trigger.

If you need to take this apart, it’s somewhat of a pain and there are a bunch of tiny screws. You should not be taking this apart unless you are an experienced DIY airsoft tech. If you do this, you void any warranties or support so if you modify your gun, do so at your own risk.

If you are looking for one of the toughest and most realistic sniper rifles out of the box, this is it. This will put certain other “high end” sniper rifles to shame or give it a run for its money. Not to put down a specific rifle but the comparisons will be made. I am sure some of the people with broken $500 sniper rifles can tell you that they do indeed go down and support for bespoke products such as that is not ideal for most people.

You also won’t come building it yourself for this price, but I’ve seen it done for closer to the thousand dollar range. I’ve built a few for customers before and the combination of starting with a basic gun and throwing everything out is what really adds up. For those that don’t build for yourself, this is the way to go as you can get it in good supply and with support at a legit retailer such as Fox. If you are the type that says I CAN DO IT CHEAPER OR I KNOW A GUY, do it. Hope it works well and tell us how it goes.